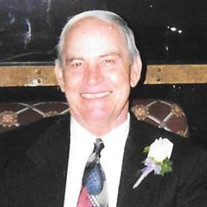 A. Allan Adams was born February 25, 1936 in Johnson City, TN to Ross and Bernice (Arttus) Adams. He passed from this life on January 6, 2018. He is survived by his wife of 64 years, Doris Gullick Adams; brothers Roger Adams, Doug Adams, Tom Adams; sisters Mary Lou Ciessau, Jan Palumbo; children Art Adams, Joe Adams, Kim Adams Price; grandchildren Melissa Zittrer, Scott Adams, Tracy Adams, Dee Dee McLeod; great grandchildren Bethany, Lucy & Zac Zittrer, Gavin & Luke Whitcher, Carter Adams, Madison McLeod. Allan was one of seven siblings. Born in Johnson City Tennessee, his family moved around during that period of time. Growing up in a large family, they learned to make the most out of what they had and pulled together always having each others back. His family eventually called South Texas home. He left South Texas at an early age and found a new beginning in the Dallas area. This is where he eventually met the love of his life, Doris. Somehow he convinced her and her parents to marry him, a joke :), and the rest was history. They moved to Austin in 1961 where he and Doris raised their family, and he had many many years as a successful businessman. Allan was a loving husband, father and grandfather. He adored the grandchildren and great grandchildren and cherished the time he spent with them. The trips to the beach were the best. His face would light up every time he saw them and with those visits. It was always tough leaving yet he always looked forward to seeing them again soon. Allan loved life; the outdoors, fishing, hunting, or in search of the perfect arrowhead, he loved it all. As siblings, and looking back, it was a blast being a part of that. He also never knew a stranger and could talk the ear off an elephant. He loved to talk. His kindness to his neighbors never ceased to amaze us. He would always find time to help neighbors whether it was with fixing a car, appliances, anything really; or even helping a stranger in need. We gave him the nickname of Goodneighbor Sam, (even though he name was Al to everyone that knew him). He had that kind of helping heart. Allan was also a trickster, but in a nice way, and would laugh so hard with you, not at you. His memory for telling jokes amazed us all, most of which were very funny, yet he would laugh so hard at all of them. He had such an infectious smile. We will miss that. Little known was that Allan loved to sing. We learned recently that at a young age he sang in plays at the school he attended in South Texas. That love of song never ceased through the years, at holiday gatherings, with friends and family, any occasion really. Even as his life was coming to an end, we could always get him to sing a line of a tune that would put smiles on all our faces. We are thankful that Dad no longer suffers from the pain his body endured and know he is now in a better place, yet he will be missed by all that loved him and he loved, and we will always remember his life he shared with us.

A. Allan Adams was born February 25, 1936 in Johnson City, TN to Ross and Bernice (Arttus) Adams. He passed from this life on January 6, 2018. He is survived by his wife of 64 years, Doris Gullick Adams; brothers Roger Adams, Doug Adams,... View Obituary & Service Information

The family of A. Allan Adams created this Life Tributes page to make it easy to share your memories.

Send flowers to the Adams family.