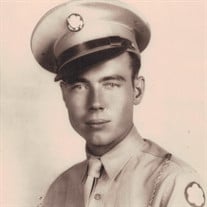 Alby Dockery, a resident of Rockwall, Texas, was born December 28th, 1919 to Carl Ben and Lola Gertrude Dockery in Island, Kentucky. Alby left this world and passed on to the next world, in order to be reunited with his Lord and Savior, his wife, twin children, family members, friends and fellow soldiers, in the early morning hours of December 24th, 2017. He died just days short of his 98th birthday. Alby was a devout Christian, a self-employed contractor and entrepreneur, an accomplished self-taught artist, auto mechanic, carpenter, gunsmith, and musician. Alby, following his retirement, taught himself how to repair antique watches/clocks (including machining clock parts). Alby grew to become an avid pocket watch collector, until he lost his eyesight in the middle 1990’s due to macular degeneration. Alby and his family left Kentucky around 1929 and eventually moved to Arkansas, following a small detour through Texas, where his father learned of a small farm for sale in Hempstead, County Arkansas. Alby’s father purchased the farm upon arrival in Arkansas and immediately settled the family in a small farming community on the outskirts of Hope Arkansas. Shortly after moving to Arkansas, Alby met a young freckle face girl with bright red hair at a Halloween party, during that same year of 1929. The young girl’s name was Gladys (Jean) Vines who lived on the farm next to the newly purchased Dockery farm; Alby was 10 years of age and Jean was 9 years of age. To say that Alby and Jean were “smitten” with each other from first sight is actually an understatement. Alby and Jean dated through childhood and up until Alby enlisted in the Army on July 24th, 1941. Due to the escalation of World War II, Alby and Jean postponed getting married. They eventually married on September 14th, 1944, following Alby’s return from his duty in the Asiatic-Pacific Theater Campaign, where he served his County as a Surgical Tech working in the operating room assisting mainly orthopedic surgeons. At the completion of World War II in 1945, Alby was discharged from the armed forces, in November of 1945. Following Alby’s marriage to Jean Vines and upon Alby’s Honorable Discharge from the U. S. Army at the end of World War II, he and Jean moved to Dallas, Texas from Hempstead County, Arkansas, in order to seek better employment opportunities. Within several years Alby ultimately built a house himself out of his back pocket. That home was located on Veterans Dr. and Loop 12 in Dallas, Texas, situated in the shadows of the VA Hospital on Lancaster Road in Dallas, Texas. Alby and Jean were married until Jean’s death on June 25th, 2004, only months short of their 60th wedding anniversary. Alby Dockery remained unmarried, until his death, on December 24th, 2017. Alby is preceded in death by his wife Gladys Jean Dockery, a set of premature twins, his parents Carl Ben and Lola Gertrude Dockery, two sisters Gladys Honeycutt, Joy Mallernee and a brother Roy Dockery. Alby is survived by his son William Terry Dockery, daughter in law Bonita “Bonnie” Dockery of Rowlett, Texas, Granddaughter Brandie Lynn Sellars, Grandson-in-law Randy Sellars, Great Granddaughter Madelaine “Maddie” Sellars of Rockwall, Texas and his Sister-in-law Margaret Louise Vines Fulkerson of Hope, Arkansas; along with numerous extended family members, friends, and neighbors. The immediate family of Alby Dockery would like to extend a special THANK YOU and recognition to the following intuitions and people who were responsible for making Alby Dockery’s life not only possible but comfortable in his final years, weeks and days. • Dallas VA Hospital Gastrointestinal Department for saving Alby’s life in 1953. • Dallas VA Hospital Visual Impairment Department, for teaching Alby to traverse with a cane and the use of visual aid equipment, as a result of Alby becoming blind, due to macular degeneration; Bruce and Mark 2010 to present • Dallas VA Hospital Dental Department for building Alby a great set of teeth; Dr. Tran and Ms. Lopez 2015-16 • Presbyterian Hospital Rockwall, Texas ER Department Staff December 12th, 2017 • Presbyterian Hospital Dallas, Texas ER Department Staff December 12th-13th 2017 • Presbyterian Hospital Dallas, Texas H301 Staff December 13th – 19th 2017 • Pathway Hospice Care Team Assigned to Alby Dockery December 19th - 24th 2017; Alicia, Kelly, Brenda, Suzan, Sharron, Bruce, Shonda Furthermore, the immediate family of Alby Dockery would like to extend a sincere show of appreciation to the Byrum Funeral Home Family of Sandra and Jeff for making a difficult time easier and a debt of gratitude is owed to Don and Francie for the respect shown to a father, grandfather, great grandfather, solider and his grieving family in the wee hours of Christmas Eve morning December 24th, 2017. Funeral Arrangements are scheduled for Friday, December 29th, 2017. Visitation with family and viewing will be held in the Byrum Funeral Home Chapel at 1:00 pm, prior to a 2:00 pm service. Interment will follow at Edgewood Cemetery in Lancaster, Texas with an open house following the grave side service. Directions and information will be provided following the Chapel Service.

Alby Dockery, a resident of Rockwall, Texas, was born December 28th, 1919 to Carl Ben and Lola Gertrude Dockery in Island, Kentucky. Alby left this world and passed on to the next world, in order to be reunited with his Lord and Savior, his... View Obituary & Service Information

The family of Alby Dockery created this Life Tributes page to make it easy to share your memories.

Alby Dockery, a resident of Rockwall, Texas, was born December...

Send flowers to the Dockery family.