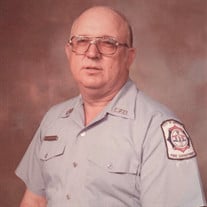 Alvin Monroe “Al” Kuykendall was born October 17, 1935 in Utica, OK to Theodore Monroe and Syble (Barton) Kuykendall. He passed from this life on November 14, 2019 in Waxahachie, TX. Al grew up on the family farm. It was a humble beginning that taught him many life lessons. They raised hogs, cows and turkeys, and grew peanuts and cotton. He and his eight siblings shared the work. At the age of 15, while watching a girl’s basketball game being played at Southeastern University in Durant, Al saw a striking, talented high school basketball player named Helen Brown. That day, he told his friend she was the girl he was going to marry. Shortly thereafter in 1954, the two were married and spent the next 65 years building a beautiful life together. They moved to Texas in 1956 and then to Lancaster in 1963 where they raised their two sons, Steve and Clint. Lancaster became their true hometown. Al was heavily involved in the community, served as a volunteer fire fighter, attended every athletic and school event his two boys participated in, and was known as the manager of the local A&P supermarket. He even ran for Lancaster Mayor once. Al left the A&P when he bought his first Dairy Queen in Cedar Hill, Texas. Later adding DQ locations in Ferris and Red Oak. Those in Lancaster knew him better for his Al’s Dial-A-Burger on Dallas Avenue. But it was his love of service that led him to be a full-time fireman for the city of Lancaster where he met and mentored a number of young men who still serve today. A great sense of pride came from his time as a fireman. After his time with the Lancaster Fire Department, Al went to work for Minyard’s as a Pharmacy Technician. His role included delivering medications in the evening. While delivering prescriptions, Al was also known for delivering his unsolicited opinions and “Al facts” which made him a favorite among those on his route. Al loved people, and people loved Al. His care for others is what kept him working till the age of 76 when he decided to spend more time gardening. Al always grew more than he and Helen needed. Others benefited from his bountiful green thumb. But what meant the most to Al was his time with family. One of his most cherished roles is that of a grandfather to his four grandchildren and most recently, his new great-granddaughter. Al is survived by his beloved wife, Helen; his sons, Steve Kuykendall and wife Mary Ann, Clint Kuykendall and wife Tammy; his grandchildren, Clint Kuykendall and wife Brittany, Heath Kuykendall, and Addison Kuykendall; his great-granddaughter Lydia; his sister, Loetta Whitley; and his brothers, Don Kuykendall, Travis Kuykendall, and Jerry Kuykendall. He was preceded in death by his granddaughter, Caitlin Kuykendall; his sisters, Fay Childress and Jane Farrell; his brothers, Glen Kuykendall and Clovis Kuykendall; and his parents. The family will receive friends from 6 pm to 8 pm on Monday, November 18, 2019 at Byrum Funeral Home in Lancaster. A Celebration of Al’s life will be at 1 pm on Tuesday, November 19, 2019 at Byrum Funeral Home Chapel in Lancaster followed by a private graveside service.

The family of Alvin Monroe "Al" Kuykendall created this Life Tributes page to make it easy to share your memories.

Send flowers to the Kuykendall family.