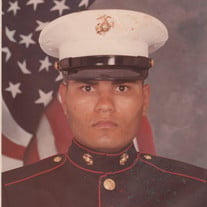 Andre Lenelle Barbour Sr. aka Superman, 55, died suddenly Tuesday, November 8th, 2016, from complications related to surgery. Andre was born August 6th, 1961, in Buffalo, NY and recently became a resident in Lancaster, TX. He worked as an aircraft engineer at Gulfstream Aerospace, and was a lifelong member of the Falcons Motorcycle Club. He was a decorated Marine. Even more than all of these things he was a son, a father, a brother, an uncle, a godfather, and a friend. His family values were of the utmost importance. His attention to detail and commitment to a job well done was second to none. His abstract skills and creative technical “Eisenstein” ability made him an exceptional innovative mechanic. His boisterous laugh and well known smile were contagious. He was a dedicated biker and loved his toys. He is survived by his son Andre L. Barbour Jr.; mother, Mildred P. Barbour; sisters Annette Anderson, Diane Barbour; brothers Robert F. Barbour (Linda), James Barbour (Sharon); Sister-in-law Diane Wardlaw Barbour, numerous nephews, nieces, aunts, uncles, cousins, close friend Sonya Multrie and former wife Mignon Hale. He is preceded in death by his father Robert F. Barbour Sr. and brother Michelangelo Barbour. The viewing will be held 12 p.m. - 2 p.m., Thursday November 17th, 2016, at First Baptist Church 305 E 3rd St., Lancaster, TX 75146 with the service immediately following.

The family of Andre Lenelle Barbour Sr. created this Life Tributes page to make it easy to share your memories.

Send flowers to the Barbour family.