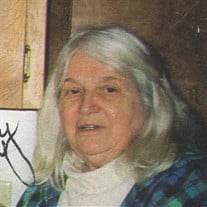 Betty Jean Nazeck, 85 Betty Jean Nazeck was born on March 18, 1931 in Lillington, North Carolina. She went to be with her Lord and Savior Jesus Christ on January 2, 2017. She was preceded in death by her parents, Rother M. 'Rock' Stone and Bessie Willis Stone, and her son Raymond H. Carr, III. She is survived by her son Raymond's widow, Lea Ann Carr; two sons, Stephen G. Nazeck and daughter-in-law Linda Nazeck of Kansas, and Joseph K. Nazeck and daughter-in-law Terri Nazeck of Nebraska; one daughter, Jennifer C. McCarley of Texas; four grandchildren, Rachelle, Nathan, Clay, and Taylor; seven grandchildren, Trey, Taylor, Aaron, Caleb, Savannah, Colin, and Tucker. Betty is survived by three sisters, Mildred Phelps of Lillington, N.C., Rosalie Ferrell of Buies Creek, N.C., and Joyce Harmon and husband Pat Harmon of Buies Creek, NC; two brothers, R.M. Stone Jr. and wife Faye Stone of Virginia, and John F. Stone of Waxhaw, N.C. “Betty was a wonderful Mom, and a Christian woman. She brought all her kids up to know right from wrong, and she would read devotionals from the book 'Little Visits with God' to all of us before we went to bed. She also made sure we went to church and Sunday School every Sunday. Our mom met Steve Nazeck at Fort Bragg in N.C. where she was a car hop at a restaurant. They dated, fell in love, became sweethearts, and were married in his home town of Omaha, Nebraska. They settled down there and raised four kids: Ray, Stevie, Jennifer, and Kirk. In the early 70’s, our mom made the decision to ask Jesus Christ to be the Lord and Savior of her life. One of the results of that decision was that she started a Christian book store called ‘The Heavenly Daisy.’ Her inventory included books, records, cards, and crafts with Christian themes, and she designed many of the cards and crafts herself. After all the kids grew up and moved out, she operated the store out of our basement. Each one of us eventually married, started a family, and moved to different places around the country. Shortly after my dad’s retirement, he passed away in 1995. Several months after his passing, our mom decided to retire from working for the Omaha Public School system at the age of 65, and began traveling around to North Carolina, Ohio, and Texas, visiting her siblings and her kids’ families. She loved to be outside, planting flowers and growing vegetables which she canned and put in her freezer. She continued to do arts and crafts, and enjoyed crocheting and watching old movies during the winter months. In January of 2000, she traveled to Pennsylvania to see her grandson Nathan get married. After that event, she limited herself to taking shorter trips because she was slowing down and didn’t have the same level of energy she once had. More of her travelling time was now spent enjoying her visits to Thrift stores and finding bargains. Her last trip out of Nebraska occurred when she travelled to Kansas with me to attend Steve and Linda’s wedding in June of 2004. Several years after that event, the time came when it was no longer safe for Mom to live alone. After moving her into a nursing facility in Omaha for people with dementia in 2013, she grew to enjoy the activities and people she spent time with every day right up to time that we moved her to a senior center located in Texas to be closer to family. She spent many afternoons with me at Lake Waxahachie with snack in hand, and later would go out for a pedicure. She also loved getting chicken at KFC, which was one of her favorite places to eat. She also loved fried fish and a hamburger and coke from McDonalds on a regular basis, and we would laugh as we watched ‘I Love Lucy’ episodes after returning from shopping. Mom’s condition took a difficult turn in August of 2016, as her mobility went from walking freely to walking with a walker or cane. In time she could no longer use a walker which eliminated our trips outside the Red Oak facility. Some of the activities she enjoyed the most during the last weeks of her life were singing and praising God, having people pray over her, and having Scriptures read to her. On Monday, January 2, 2017, she spent her last day on earth and her first day in heaven with Jesus.”

Betty Jean Nazeck, 85 Betty Jean Nazeck was born on March 18, 1931 in Lillington, North Carolina. She went to be with her Lord and Savior Jesus Christ on January 2, 2017. She was preceded in death by her parents, Rother M. 'Rock' Stone and... View Obituary & Service Information

The family of Betty Jean Nazeck created this Life Tributes page to make it easy to share your memories.

Send flowers to the Nazeck family.