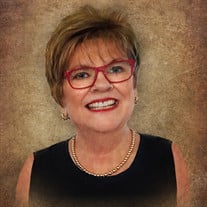 Billie Vadine Goforth Kissinger was received into the arms of her Lord and Savior on September 11, 2016, after fighting a courageous battle with cancer. Billie was born to Bill and Vada Goforth on December 9, 1945 in Lancaster, Texas, where she and her brother Ramon Earl Goforth grew up. She was a member of the Lancaster Drill Team graduating from Lancaster High School in 1964. Upon her graduation, Billie went to Baylor University to earn a B.S. degree in Elementary Education in 1968. There she developed her lifelong love of the Baylor Bears. She was immediately hired as an elementary teacher and began her career in Dallas area public schools. While teaching full time, she returned to school earning her Master’s Degree in Guidance and Counseling from North Texas State University in 1972. After receiving her M.Ed. in Counseling, Billie spent the 1972-1973 school year as a school counselor at Misawa AFB, Misawa, Japan. It was from her classroom at Dan D. Rogers in 1986 that she was recruited by University Park Elementary principal Charles Cole to develop an elementary counseling program for the Highland Park ISD. At first, she served as counselor for both University Park and Bradfield elementary schools. Her pioneering work in elementary counseling would eventually lead to a full time counselor being assigned to each of the district’s elementary schools. Later, Billie assumed the full time counseling position at University Park Elementary. On HPISD’s counseling team, Billie was instrumental in establishing a comprehensive guidance program that incorporated many innovative strategies designed to serve young children, strengthen their families, and foster life-long relationships. She took great pride in her professional work through continuous learning and leadership in both the North Texas Counseling Association and the Texas Counseling Association. She retired from University Park in HPISD in May, 2014 celebrating a legendary 46 years as Texas Educator and Licensed Professional Counselor. For her 28 years of exceptional work at UP, she was honored as a lifetime “Pawsitive Panther” by the many children, families, and colleagues who loved her. Billie’s impact over more than four decades literally touched the lives of thousands of people. Billie is survived by a daughter Kathryn Lynn Kissinger of Dallas, Texas, a brother, Ramon Earl Goforth and wife JoAnn of Desoto, Texas, a niece, Nannette Pope of Bryan College Station, Texas, and, a nephew, James Goforth of Desoto, Texas. She is also survived by Kathryn’s father Donald Lynn Kissinger and a host of friends who loved her so much and will miss her warmth, wisdom, wit, style, caring heart, listening ear, mentoring, friendship and love for children. Among her favorite roles was honorary grandmother to Mallory and Mary Green, to whom she was and will always be Bibby! May her memories be beautiful and eternal! Memorial contributions may be made, if desired, to The Kathryn Lynn Kissinger Discretionary Special Needs Trust at 9802 Victorian Court, Dallas, Texas, 75243.

Billie Vadine Goforth Kissinger was received into the arms of her Lord and Savior on September 11, 2016, after fighting a courageous battle with cancer. Billie was born to Bill and Vada Goforth on December 9, 1945 in Lancaster, Texas, where... View Obituary & Service Information

The family of Billie Vadine Kissinger created this Life Tributes page to make it easy to share your memories.

Billie Vadine Goforth Kissinger was received into the arms of...

Send flowers to the Kissinger family.