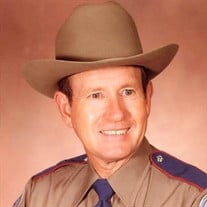 Billy Ray Dickey was born January 24, 1933 in Dallas, TX to Alex Jeff and Cleo Dickey and passed from this life on December 10, 2021. Billy was a devout Christian serving the First Christian Church of Lancaster for over 20 years on the Board of Trustees and Elders, a Deacon, Sunday school teacher and served over 10 years as financial secretary. He served at Ovilla United Methodist Church as an Usher, Liturgist and rotation helper in small children Sunday school. He volunteered in many organizations and was always visiting and helping those sick or in need. He was devoted to his wife and family taking every opportunity to be with them or help them in any way possible. He loved to travel and cherished the memories made on summer vacations with the family and the Halls. He also organized and volunteered in many scholarship programs to help children and family's all over Texas. The two golf tournaments he is most proud of are the Todd Hall Memorial and DPS Captain Bill Summerlin Memorial, which have help countless young adults for over 30 years. Billy Ray enlisted in the U.S. Air Force February 5, 1953 and was discharged on February 4, 1957. During that time, he served in the Korean War, moved troops and cargo all over the far east. He became a crew member on the B-36, B-50, B-29 and the X-2 Rocket ship taking it to drop altitudes. He continued his military career, served four years inactive Air Force Reserve, one year in the Army Guard and finished his military career with the Texas Air National Guard as a Senior Master Sergeant. He retired from the military with over 27 years of duty. During this time, he began his career as a Texas State Trooper in 1961, which took him to Amarillo, McKinney and Lancaster. He was a License and Weight Trooper IV and an Investigator for the motor carrier violation division. Masonic career started in Amarillo in 1963, where he served in all stations and places. Past Master at Lancaster 160 and Red Oak 461, Jr. Deacon of Claud L. Austin Daylight 1450. He was a Scottish rite Mason 32nd Degree and received the 33rd degree Inspector General Honoree White Hat. He served as Commander of the Council of Kadosh, member of Hellas Shrine, Red Cross of Constantine, Holy Grail 287, York Rite Sovereign College of N.A. among many other organizations. He is also a member of the Order of Eastern Star Lancaster 943 and Ferris 508, where he was Past Patron of both chapters. He is an endowed member of all the before mentioned. He was preceded in death by his beloved wife, Peggy; his sons, Gary Wayne Dickey and Curtis Edward Dickey; and his parents. Billy is survived by his children, Leigh Ann Fox and Michael Rex Dickey; his daughter-in-law, Lois Dickey; his grandchildren, Lori Fox, Kristen Dickey and wife Heather Dickey, John Burns, Kody Burns, Weston Fox and wife Megan, Meagan Fox, Tamara Greer husband Cody, Justin Fox, Brooke Cornett and husband Ethan, Courtney Dickey, Douglas Todd Dickey, and Trace Dickey; his great-grandchildren, Arianna Fox, Jude Burns, Kieran Burns, Emmaline Rose Burns, Ruby Gene Cornett, Delilah Rose Cornett, Elijah Fox, and Charlie Joy Greer; and his sisters, Norma Jean Becker, Rowena Head and husband Rex, Arlene Lowe and husband David, Lorene Franke and husband Leroy, and Mary Phillips and husband Jerry; and numerous nieces and nephews. A celebration of Billy’s life will be at 10:00am, Saturday, December 18, 2021 at Ovilla United Methodist Church with interment at Red Oak Cemetery immediately following. In lieu of flowers, the family requests memorial donations be made in Bill’s name to the Alzheimer’s Association.

Billy Ray Dickey was born January 24, 1933 in Dallas, TX to Alex Jeff and Cleo Dickey and passed from this life on December 10, 2021. Billy was a devout Christian serving the First Christian Church of Lancaster for over 20 years on the Board... View Obituary & Service Information

The family of Billy Ray Dickey created this Life Tributes page to make it easy to share your memories.

Send flowers to the Dickey family.