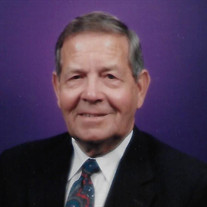 Billy Dean Farish Born September 20, 1932 Corsicana, TX passed peacefully September 6, 2020 with two of his three sons by his side and the third one had driven 8 hours both ways to see him the day before. He is now with his beloved wife of 60 yrs., Mary Inda Farish who preceded him in death. Bill graduated from Corsicana High School in 1950. After graduation, Bill enlisted in the U.S. Marine Corp reaching the rank of Corporal and served in the Korean War. Survived by, sons, Dr. Mike Farish and wife Rhonda of McKinney, Brad Farish and life-partner Shari of Carrollton, Jeff Farish and wife Denise of Houston; grandchildren, Chris Farish and wife Erin of Dallas, Sarah Arthur of Plano, Billy Farish of Jacksonville, Fl., Natasha Farish of McKinney, Josh and Jake Farish of Houston; great-grandchildren, Carson Farish of Dallas, Jackson Arthur of Plano, Cole, Case and Carter Farish of Ore City, Lexi Farish of McKinney; siblings, Brother Clifford Farish of Greenville, Peggy Tipping of Dallas, and Claudia Patton of Cocoa Beach, FL. He is preceded in death by his parents Vernon Farish and Thelma Farish Thompson, and brother, Floyd Farish. He was loved by many nieces, nephews, cousins and a surrogate of kids and friends from the raising his 3 sons in Lancaster. Bill was a 54 year resident of Lancaster where he filmed the varsity football games for many years and was also the President of Athletic Booster Club. Bill coached little league for many and also served on various city planning committees. He was known by several kids in Lancaster with respect as Mr. Farish as well as Mr. Bill, helping kids and making them laugh. Bill was constantly assisting others with his carpentry and mechanical skills, there was not anything he could not fix or build nothing that he would not do to help anyone that asked without expectation of payment. Family will receive friends from 10:00am to 11:00am, Monday, September 14, 2020 at Byrum Funeral Home Chapel with a celebration of Billy's life beginning at 11:00am. Graveside services by invitation only, due to current restrictions, will be later at DFW National Cemetery, Dallas, TX. In lieu of flowers, family requests memorials in honor of Bill to the Parkinson’s Foundation https://www.parkinson.org/?utm_source=google&utm_medium=cpc&utm_campaign=Google_AlwaysOn_Brand&utm_term=parkinson%27s%20foundation&gclid=Cj0KCQjwwOz6BRCgARIsAKEG4FXMQuGEIWuwHZi9SAOmM-oUWjZpx9kVDVO1MKPefdQIUSFGjnJ0dCEaArwhEALw_wcB

Billy Dean Farish Born September 20, 1932 Corsicana, TX passed peacefully September 6, 2020 with two of his three sons by his side and the third one had driven 8 hours both ways to see him the day before. He is now with his beloved wife of 60... View Obituary & Service Information

The family of Billy Dean Farish created this Life Tributes page to make it easy to share your memories.

Send flowers to the Farish family.