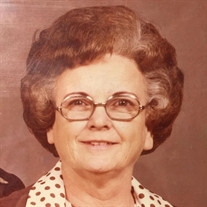 Billy Jean “Jiggs” Goodson, age 92, went to be with her Lord and Savior on Sunday August 15, 2021. She was born January 19, 1929 in Dallas, Texas to Sally Ann Price and Willie F. Mahoney. Her father passed away when she was 3 and she was raised by her stepfather Floyd A. Franklin. He was truly a father to her and her siblings for the rest of his life. Billy was a strong Christian woman and longtime member of the Grace Cathedral Assemblies of God Church in Lancaster, Texas. When her children were older, she took an H&R Block tax preparation course and, for many years after that, she managed an office and prepared taxes for the company. She started doing ceramics and painting as a hobby and eventually set up her own studio. She loved sewing, crocheting, cooking, and bible study. She served in many positions in the church through the years. Billy and her husband started Goodson Tile Company in the early 1960’s and ran the business together until his death in 2003. She was Granny to all that knew her. She was a kind, loving, no-nonsense kind of person. She was the backbone to the whole family and was always there for anyone that needed her. She set a Godly foundation for her family and planted the seeds of faith in all of her children. Her door was always open and, she was willing to help in any way she could. She believed that you must always keep moving forward and do what you have to do. She was the true example of a grandmother that prayed for her children and grandchildren. Her love for her family and Christ will be remembered long after her passing. She was preceded in death by her husband of 53 years, Donald Ray Goodson; by four of her five children, Floyd Reese, Willie T. Reese, Billy Ray Goodson, and Debbie Jo Goodson; her grandson, Alex Reese and granddaughter, Serenity Dawn Goodson. Billy Jean is survived by her daughter Clara Mobley (and husband Grady); her boys, as she called them, Tommy and Chance Goodson; her grandchildren, Debra Griggs and husband Arnold, Michael, Michelle, and Mark Mobley, Sam Goodson and wife Amanda, Stephanie Coleman and husband Ronnie, Sally Goodson, Lacy Goodson, Willy T. Reese Jr., Brandi Larson and husband Jayson, Justin Sterry, and Karma Goodson; her great-grandchildren, Michael Reese, TeAna, BreAna, DaunTe, and Deion Sargent, Chris Evans, Cameron and Kenedi Larson, Laine Goodson, Tailynn Reese, and Luke and Lily Mobley; and her great-great-grandchildren, Bhry’Son Sargent, Silas Keys II, and Brennan Keys. Family will receive friends from 5:00pm to 7:00pm on Thursday, August 19, 2021 at Byrum Funeral Home Chapel. A celebration of Billy Jean's life will be at 12:00pm on Friday, August 20, 2021 also at Byrum Chapel.

The family of Billy Jean Goodson created this Life Tributes page to make it easy to share your memories.

Send flowers to the Goodson family.