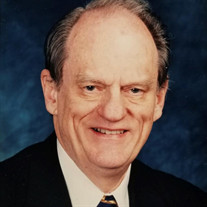 In lieu of flowers, family would prefer donations be made to the First Baptist Church of Lancaster. Dr. Charles W. Waldrop Jr. passed away surrounded by family on Thursday, October 4 after a valiant battle with metastatic melanoma. Charlie was born on September 15, 1933 in the college town of Murray, Kentucky to Melda and Wesley Waldrop. His family home is now part of Murray State University (where Charlie went to school and met his wife, Margie, of 61 years). Growing up, Dr. Waldrop's father had an unfulfilled dream to be a doctor which inspired a young Charlie to become one, not only for himself, but also for his father. After graduating from Murray State University with a BA degree in Biology and Chemistry, he briefly worked as a chemist at Dupont before entering University of Louisville Medical School. Upon graduation, he continued his education with a residency at the Jackson Memorial Hospital in Miami, Florida. Feeling a call to serve his country, Dr. Waldrop proudly joined the U.S. Air Force where he was a Flight Surgeon for the 55th Tactical Fighter Squadron serving in England in the early 1960's. Following his discharge in 1962, he came to Lancaster, Texas to begin his career as a Family Physician. His experience in the Air Force afforded him opportunities to work with area pilots. Among his other physician duties, he also was a Senior Aviation Medical Examiner with the Federal Aviation Administration (FAA) and performed FAA medical exams at his office. Throughout Dr. Waldrop's 50-year career as a beloved doctor, he was known to his colleagues, nurses, staff and patients for his unfailing commitment and valued as a deeply thoughtful mentor and advisor to many colleagues and friends. As many will attest, patients often willingly experienced long waits to see 'the doc' because once they were in the examining room they knew they would have his undivided attention and compassionate care. In a last selfless act, he donated his body to cancer research in hopes of saving more lives through his death. One of the reasons Dr. Waldrop was an excellent doctor was his intense desire to continue training himself on the many changes within the medical field. As a result, Dr. Waldrop was involved in numerous medical organizations including Past President of the Dallas Chapter of the American Academy of Family Physicians (AAFP), active in the Texas Academy of Family Physicians (TAFP), serving on the Health Care Services Committee and the TAFP PAC Committee in Austin. He was a member of the Texas Medical Association, the Dallas County Medical Society and the American Medical Association. For many years, he was on the staff for Methodist Hospital and Charlton Hospital. In 1985 and 1994, Dr. Waldrop served as chief of staff of the Medical Center of Lancaster. He was also Vice President of the Family Practice department at Charlton Methodist Hospital in Dallas, Texas for a number of years. As a long-time resident of Lancaster, Dr. Waldrop was strongly involved in various community and area activities helping this town he loved in so many ways. He served as Chairman of the Lancaster Chamber of Commerce, two years as Lancaster City Councilman, 12 years on the Lancaster School Board (including four as President) and served on the Lancaster Airport Board for many years. In 1982, Dr. Waldrop received the Lancaster Chamber of Commerce Golden Gaither Award for outstanding service to the City of Lancaster over many years. In Dr. Waldrop's years on the City Council, he spear-headed an effort to get I-20 construction moved closer to Lancaster. Although he failed to move the location, he did get a guarantee from the Highway Department to four-lane Pleasant Run and six-lane Lancaster Road (both main thoroughfares into the city). He was also instrumental in bringing a hospital to the City of Lancaster. Although he worked hard all his life, he so enjoyed time with his family and friends. Whether snow skilling in Colorado, riding a wave in Florida or sailing, he was always up for a fun family vacation. Over the last year, he fondly recalled the last trip he took with his family along with a group of friends. He was a man who loved his family deeply and cherished his friends. Dr. Waldrop is preceded in death by his parents; sister Isabell Hunt and her husband Bill; and in laws Hearld and Marguerite Whitmer. He is survived and forever remembered by his wife Margie; son Chuck and his wife Cindy; daughter Heather Wetzig and her husband Keith; nephew Tripp Hunt and his wife Nikki; grandnephew Will and his wife Brittni; great grandniece Bella and great grandnephew Liam.

In lieu of flowers, family would prefer donations be made to the First Baptist Church of Lancaster. Dr. Charles W. Waldrop Jr. passed away surrounded by family on Thursday, October 4 after a valiant battle with metastatic melanoma. Charlie... View Obituary & Service Information

The family of Dr. Charles W. Waldrop Jr. created this Life Tributes page to make it easy to share your memories.

In lieu of flowers, family would prefer donations be made to...

Send flowers to the Waldrop family.