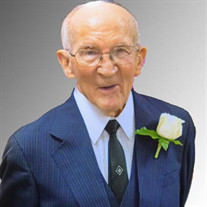 Curtis Regan, Jr., a beloved husband, father and brother passed away peacefully on November 23, 2020, in Midlothian, TX, at the age of 97. Curtis was born on October 13, 1923, in Lake Creek, TX, to William Curtis and Mary Emily (Russell) Regan, the 4th of seven children. He grew up on the family farm and lived there until he enlisted in the US Navy after graduating from Cooper High School in 1941. He enrolled in East Texas State University in September of 1944 and received his Bachelor of Science degree in 1947, majoring in Industrial Arts with a minor in Math. After a short stint teaching at Delmar High School, he moved to Midland, TX, to begin work as draftsman in an oil company. Still having a desire to teach, he took a job as a shop teacher, working for the Midland Independent School District. In 1952, he took a job as a draftsman and oil scout with Kerr-McGee Oil Industries, working for them in various positions and in various cities (Midland, New Orleans, Amarillo, Houston and Oklahoma City) for 18 years. He then decided to become an Independent Landman, moved to Lancaster, TX, and worked for various oil companies until his retirement. Curtis met the love of his life, Mary Ann Goddard, in the Single Adult Sunday School class at First United Methodist church in Midland, TX. They married on April 24,1954, and they were married for 63 years. He was a devoted father of 3 daughters, who he often referred to as his “3 angels”. He dedicated his life to his family and his church, serving in various volunteer positions. He was a longtime member of First United Methodist Church in Lancaster, TX. Curtis loved yardwork, grilling steaks, woodworking, sketching, painting, and playing with his grandchildren. He also loved supporting Baylor University, the alma mater of his 3 daughters. Curtis was preceded in death by his wife, Mary Ann Regan; his son in law, Wynn Drumm; and his siblings Russell, Lewis, Martha, Vanoy and Veda. He is survived by his brother, Gary Regan & wife Tommie; daughters, Pam Drumm, Emily Keale & husband Chris, and Kathy Dickinson & husband Jeff; grandchildren, Michelle Thomson & husband Blake, Alyssa Fleps & husband Tom, Sadie Footer & husband Derek, Megan, Christopher & Erin Keale; great-grandsons Thomas & Benjamin Fleps and great-granddaughter Regan Footer. He will be greatly missed by all those who loved him. In lieu of flowers, donations can be made to the charity of your choice. Given the current pandemic situation, Curtis will be buried in a private family burial in the Regan family plot at Lake Creek Cemetery in Lake Creek, TX.

Curtis Regan, Jr., a beloved husband, father and brother passed away peacefully on November 23, 2020, in Midlothian, TX, at the age of 97. Curtis was born on October 13, 1923, in Lake Creek, TX, to William Curtis and Mary Emily (Russell)... View Obituary & Service Information

The family of Curtis Regan Jr. created this Life Tributes page to make it easy to share your memories.

Send flowers to the Regan family.