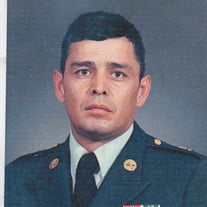 Danny is not with us anymore. He went ahead of us and it is something that has broken our hearts: his company will never be replaced and memories about him will be always in our minds and hearts; his smiles, his sense of humor, and his distinguished personality. Danny Reyes Martinez, Sr. of Lancaster, Texas was born July 6, 1954 in Ballinger, Texas, to David and Manuela (Reyes) Martinez. Danny passed from this life on November 26, 2016 due to a heart attack. Danny is survived by wife Senorina (Moyao) Martinez; sons Daniel Martinez, Nicholas Martinez and Alejandro Moyao; daughers Azucena Moyao, Lizeth Moyao, Virginia Martinez, Bernadette Martinez, April Martinez, Melissa Martinez; 15 grandchildren and 5 brothers, Adan Martinez, David (Shirley) Martinez, Rey (Teresa) Martinez, Jesse (Jackie) Martinez, Arthur (Gracie) Martinez Eddie Michael (Tania) Martinez as well as 3 sisters, Nellie (Robert) Ramirez, Sylvia (Ralph) Ybarra and Stella Martinez. Danny was preceded in death by his parents David and Manuela (Reyes) Martinez; brother Eddie Michael Martinez; niece Brianna Josie Ybarra. All his life he had prominent bravery and heroism. When he was 19 years old in 1973 Danny enlisted in the Army. He defended our nation for 22 years and he received multiple honors and awards: Bronze star (1991), Good Conduct Medal (6 Clusters), Army Commendation Medal (5 Clusters), Army Achievement Medal (3 clusters), Saudi, Arabian Liberation Ribbon, President Citation Ribbon, Noon-Commissioned Officers Course Ribbon, National Defense Ribbon with Bronze Star, Service Ribbon and Unit Citation Ribbon. He was always proud of his long career in the military. He knew that there was nothing else more honorable than to serve his country and to give his life for it if possible. As a father and husband, he was always responsible and dedicated. Education that he provided to his kids was based on the principles of discipline and dignity. He knew that to succeed in life people have to work hard. On more than one occasion at the hospital, he requested insistently his computer and other tools to work with while he was in recovery. The time for him always had to be used, and if he used it to work that was even better. His witty sense of humor always invited others to laugh and to spend nice moments together. He never saw barriers in anything. His high self-esteem spread to others and made them feel confident as well. He showed us a human being that through the time became wise and intuitive. Danny was a noble and wonderful man. He had nobility and wished to help others even if he did not meet them. This was definitely one of his most beautiful qualities. He showed us his compassion to forgive others and to offer his hand to people, even the those who hurt him. Danny traveled to many places, such as Austria, Australia, Vietnam, Iraq, Germany and Mexico. He shared with pride his experiences in these countries. Sometimes they were nice experiences and sometimes they were not. He also traveled to several places here in the United States (Las Vegas, Boston, Hawaii, El Paso, Mc-Allen and others) where he participated in competitive bowling as well as just for fun. Being a handsome man when he was young and old, he captivated many women, but there was just one with whom he shared the rest of his life and to whom he dedicated eternal love; her name is Senorina. Now she grieves her husband’s death and her wish is to meet with him one day when God decides the time is right. At an early age Danny became a hero, being a solder, and by the end of his life he continued being a hero because he saved the life of two people donating his kidneys and his liver. Danny Martinez was an example of great human being and an inspiration to work hard and to love others without expecting anything in return. Rest in peace Danny.

Danny is not with us anymore. He went ahead of us and it is something that has broken our hearts: his company will never be replaced and memories about him will be always in our minds and hearts; his smiles, his sense of humor, and his distinguished... View Obituary & Service Information

The family of Daniel (Danny) Reyes Martinez Sr. created this Life Tributes page to make it easy to share your memories.

Danny is not with us anymore. He went ahead of us and it is something...

Send flowers to the Martinez family.