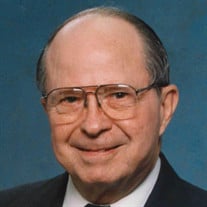 Daniel Joseph Egan was born March 10, 1931 in Ballinger, TX to Thomas and Mabel (Moore) Egan and passed from this life on July 14, 2020 in Dallas, TX. Daniel received an Associate Degree in Business from San Angelo Junior College in 1951. He also began serving in the National Guard during college. In 1952, he moved to Dallas and began working at The Motor Mart in Dallas, rising from Counterman to Vice President and General Manager. He remained at The Motor Mart for thirty years. During that time he began selling insurance part-time for the Catholic Life Insurance Union. Upon leaving the Motor Mart, he worked for Catholic Life Insurance Union full-time, rising to Area Supervisor for the Dallas/Fort Worth region. After leaving the insurance field, he worked for H&R Block for many years. Daniel and Josephine loved to travel. Over the years, they visited all fifty states and many European countries. Daniel and Josephine were charter members of the St. Francis Catholic Church in Lancaster in 1968. Daniel served on the St. Francis Finance Committee until his death. He is preceded in death by his parents, Thomas and Mabel; his sister, Anne Hermann; and his brother, Thomas Egan. Daniel is survived by the love of his life for 68 years, Josephine; his children, Cecilia Egan and husband Ronnie Arnold, Daniel Egan Jr and wife Cheryl, Stephen Egan and wife Judy; his grandchildren, Jessica Arnold, Katherine Parr, Daniel Arnold, Richard Arnold, Douglas Egan, Stephanie Wickwire, Thomas Egan, Scott Egan, and Kelly Schenck; his great-grandchildren, Miranda Perhacs, Mikayla Perhacs, Matthew Wickwire, Joseph Wickwire, Tyson Weaver, Braden Weaver, Austin Egan, and Taylor Schenck; his siblings, Michael Egan and Jerome Egan; and many extended family and friends. Family will receive friends from 5:00pm – 7:00pm, Friday, July 17, 2020 at Byrum Funeral Home Chapel with a Rosary beginning at 6:00pm. Mass of Christian Burial will be at 10:00am, Saturday, July 18, 2020 at St. Francis Catholic Church in Lancaster, TX. Graveside service will be at 10:00am, Monday, July 20, 2020 at Holy Redeemer Cemetery in DeSoto, TX. In lieu of flowers, the family requests memorials be made in Daniel’s name to the North Texas Food Bank.

Daniel Joseph Egan was born March 10, 1931 in Ballinger, TX to Thomas and Mabel (Moore) Egan and passed from this life on July 14, 2020 in Dallas, TX. Daniel received an Associate Degree in Business from San Angelo Junior College in 1951. He... View Obituary & Service Information

The family of Daniel Joseph Egan created this Life Tributes page to make it easy to share your memories.

Send flowers to the Egan family.