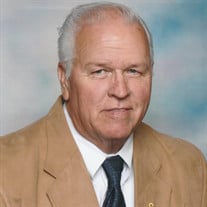 Danny Lawrence Douthit went to be with his Savior, Jesus Christ, on Monday April 20, 2021 after a valiant fight against Covid-19. Danny was born on September 26, 1947 in Turlock, California. He moved to Texas in 1960 and met the love of his life, Ruth Westmoreland, at a Halloween party in 1963. They married on November 6, 1965, and began their life's adventure together. Danny was drafted into the Army in 1967, and proudly served his country in the Viet Nam War where he was presented with the Bronze Star for meritorious service. Upon his return from Viet Nam, Danny became a barber which would be an integral part of his life that connected him with so many of his friends. Danny's work ethic came from a self-taught drive and ambition that would center his life around providing for his family and giving back to others. His ambition to succeed led him to begin his own construction company, Douthit Contracting, Inc., which he grew for 40 years prior to his “retirement.” Danny's work provided purpose and provision for his life, but his passion was his family and giving back to the community. Danny was so proud of his wife Ruth, his son Danny, and his daughter Jennifer. However, it was his grandchildren, Bryson, Brenna, Brooke, and Mason that filled his chest with pride more than anything else in his life. His desire to serve his community was a consistent thread that ran throughout his life ranging from involvement with outreach centers to election to city council posts. Danny was a proud and committed member of the Masonic Lodge and was a Shriner who enjoyed raising funds locally so they could be contributed to their life changing work. Danny is survived by his wife of 54 years, Ruth Douthit; his son, Danny Douthit and wife Allison; his daughter, Jennifer Garner and husband Chris; and his grandchildren, Bryson Douthit, Brenna Douthit, Brooke Douthit, Mason Garner, Lindsey Garner, and Justin Garner. His celebration of life service will be held on Tuesday, April 27th at Eastridge Baptist Church in Red Oak, Texas. A time of visitation will begin at 10:30 a.m. followed by his service beginning at 11:30 a.m. For those wishing to express their love for Danny, a donation to Scottish Rite is requested in lieu of flowers.

Danny Lawrence Douthit went to be with his Savior, Jesus Christ, on Monday April 20, 2021 after a valiant fight against Covid-19. Danny was born on September 26, 1947 in Turlock, California. He moved to Texas in 1960 and met the love of... View Obituary & Service Information

The family of Danny Lawrence Douthit created this Life Tributes page to make it easy to share your memories.

Danny Lawrence Douthit went to be with his Savior, Jesus Christ,...

Send flowers to the Douthit family.