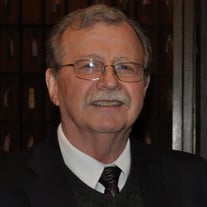 Donald “Don” Woodlan was born on August 9th 1946 in Painesville, Ohio, to Donald and June (Ward) Woodlan. Don remained in Painesville throughout his childhood along with his 2 brothers Larry and Jim. He attended Riverside High School where he was a true all-American boy. Don was an excellent student, halfback on the varsity football team, 3rd baseman on the baseball team, Key Club President, All-State competitor, and Senior Class President. High school is also where he met the love of his life, Judith Zuber. Don was the first graduate of Riverside High School to be appointed to the United States Naval Academy. Attending the Naval Academy was a great honor and challenge and, although they spent very little time together, his heart remained true to Judy. Don and Judy were married on December 28, 1967. He graduated in 1968 with a degree in electrical engineering and went on to serve in the Navy for 7 years where he spent the first year earning a master’s degree in electrical engineering from Michigan State and then served on the naval submarines USS Jack and the USS Sam Rayburn. Don was honorably discharged in 1975 as a Naval Lieutenant. Don and Judy had many adventures while in the Navy and lived throughout New England and California, giving birth to 2 children along the way. After the Navy, Don went on to work for Perry Nuclear Power Plant in Perry, Ohio. He worked there for 4 years before being hired by Texas Utilities and moving his family to DeSoto, Texas, in 1979. Don retired in 2014 taking great pride in the work he accomplished securing and maintaining the operating license for Comanche Peak Nuclear Power Plant, but his true passion in life was his family. Don could not have been more committed to his family. He was his family’s biggest fan and never missed an activity his children and grandchildren were involved in, where he was often seen behind a video camera capturing it all on film. He had an incredible bond with all his loved ones and will be greatly missed every day. Don was diagnosed with cancer in 2019 and battled the disease with every ounce of his being. At 5:35am on October 9, 2021, surrounded by his loving wife, daughter, and son, he passed out of this world to join his parents and younger brother Jim in heaven. Don is survived by his wife Judith (Zuber) Woodlan, brother Larry Woodlan and wife Ellen of Fountain Hills, AZ., daughter Melissa Smith and son-in law Gene Smith and their 2 children Tyler and Katy of Cedar Hill, TX, son Donald Woodlan and daughter-in-law Stacia Woodlan and their 2 children Michael Rareshide and McKenna Woodlan of Midlothian, TX. In lieu of flowers, the family asks that you donate to Family Musical Theatre (www.familymusictheatre.com), an organization that Don supported for many years, or give the gift of life by donating blood and platelets to your local blood bank. Family will receive friends from 10:00am to 12:00pm on Tuesday, October 26, 2021 at Byrum Funeral Home Chapel with a celebration of Don's life beginning at 12:00pm also in Byrum Chapel. Interment will follow at 2:30pm at DFW National Cemetery.

Donald &#8220;Don&#8221; Woodlan was born on August 9th 1946 in Painesville, Ohio, to Donald and June (Ward) Woodlan. Don remained in Painesville throughout his childhood along with his 2 brothers Larry and Jim. He attended Riverside High School... View Obituary & Service Information

The family of Donald Ray Woodlan created this Life Tributes page to make it easy to share your memories.

Send flowers to the Woodlan family.