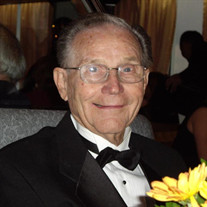 Edgar Arvil Terrell, 99, of Lancaster, Texas, went to be with his Lord and Savior on January 28, 2022. Edgar was born on July 24, 1922 in Snyder, Oklahoma to Corda and Chester Terrell, migrant farm workers of humble means. He liked to share stories of his hard-working parents, memories of picking cotton alongside them, living in a home with a dirt floor - even traveling by covered wagon to find work. One of his favorites was to say that he wasn’t born in a hospital, but instead born at home “so I could be close to my mother.” He graduated from Diamond Hill High School in Ft. Worth, Texas and attended Baylor University. Edgar joined the United States Navy on September 21, 1942 and proudly served in both theatres of World War II - the European Theatre aboard the USS Destroyer Escort Herbert C. Jones off the Italian coast of Anzio and then the Pacific Theatre aboard the USS Grundy. He was discharged from the Navy on October 31, 1945. A proud veteran, he was often seen in his favorite World War II Veterans cap. He loved talking to people who would regularly stop him and thank him for his service to our country. During one weekend leave in 1944, Edgar went to Lowell, Massachusetts with a couple of ship buddies. It was there he first met the love of his life, Lillian Nunes. She served him a chocolate malt at the local Five & Dime. He later said he just “happened” to be standing outside the door when she got off work that evening. The story goes that after much convincing (she already had a promise ring from another suitor) Lillian boarded a train for Oklahoma to marry Edgar. The couple were wed on February 13, 1946, just one day before Edgar’s father, Chester, passed away. Edgar and Lillian shared quite a love story, with a marriage that would span almost 58 years, and be filled with more joy and laughter than anyone can imagine. Edgar’s greatest joy, next to his family, was sharing the gospel of Jesus Christ with others. A pastor for more than 60 years at churches from Frederick, OK, to Wilmer and then Lancaster, TX, he touched more lives and preached more sermons, weddings and funerals than we can count. While small in stature, Edgar could deliver the gospel with gigantic joy. Edgar was preceded in death by his loving wife, Lillian Nunes Terrell, and devoted daughter, Carolyn Sue Terrell Lee. Edgar is survived by daughter Sandra Leavelle and husband, Benny, son Joe Terrell and wife, Hallye, son-in-law David Lee, 7 grandchildren, 11 great-grandchildren and 5 great-great-grandchidren. Grandchildren are Jeromy Leavelle and wife, Donna, Ashley Norman and husband, Brad, Jack Edgar Terrell, Gillian Terrell, Cheryl Quisenberry and husband, Robert, Curt Landers and wife, Reagan, David Lee, Jr., and wife, Terrie. Great-grandchildren are Bradley Norman, Jr., Connor Landers and wife, Bella, Zachary Fuller, Austin Norman, Tyler Quisenberry, Cooper Quisenberry, Carlton Lee, Levi Leavelle, Noah Leavelle, Paige Leavelle, and Luke Landers. Great-great-grandchildren are Hudson Norman, Lilah Norman, Vivian Norman, Benjamin Landers, and Chloe Landers. It would be remiss to omit Edgar’s favorite “Paw-Pawisms,” as they’ve been known to be called: from his “well, woo-pee-doo!” to “it’s not fattening, it’s just bumpy,” to (while pointing to Lillian) “give the check to my mother.” There were many more. His favorite scripture, so very often quoted, was “Love Never Fails” - 1 Corinthians 13:8.

Edgar Arvil Terrell, 99, of Lancaster, Texas, went to be with his Lord and Savior on January 28, 2022. Edgar was born on July 24, 1922 in Snyder, Oklahoma to Corda and Chester Terrell, migrant farm workers of humble means. He liked to share... View Obituary & Service Information

The family of Edgar Arvil Terrell created this Life Tributes page to make it easy to share your memories.

Edgar Arvil Terrell, 99, of Lancaster, Texas, went to be with...

Send flowers to the Terrell family.