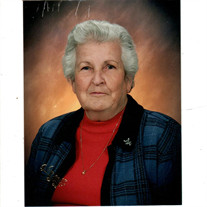 Edna E. Calvin of Hutchins, Texas was born May 6, 1922. She passed from this life on August 5, 2018. Edna was member of Ferris United Methodist Church and United Methodist Woman. She was preceded in death by parents Lon and Virgie Flippen;... View Obituary & Service Information

The family of Edna E. Calvin created this Life Tributes page to make it easy to share your memories.

Send flowers to the Calvin family.