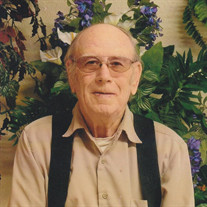 Elisha “Woody” Woodall was born August 10, 1934 in Lone Oak, TX to Erman Jasper and Bertha May (Bloyed) Woodall. He passed away September 30, 2019 in Red Oak, TX. Woody was a driver for the Dallas Times Herald for many years. He was also a long-time member of the Central Baptist Church in Lancaster. Not only was he involved in church, but he also volunteered at Westridge Nursing Home by leading singing for their worship services. Woody loved wood working, but more than that, he loved his family. One of the highlights of his life was when his grandchildren were born. He truly adored them. He is preceded in death by his parents; his brothers, Jerry Woodall and Erman Woodall; and the love of his life, Margaret “Marge” Woodall. Woody is survived by his son, Calvin Ray Woodall and wife Elita; his son, Russell Woodall and wife Patti; his son, Wendal Woodall and wife Melodie; his grandchildren, Dana Fay Woodall, Nate Woodall and wife Rita, Betsy Woodall, Brandon Woodall and wife Johnna, Taylor Woodall, and Cela Woodall; his great-grandchildren, Thomas Woodall, Preston Woodall, Faith Woodall, and Grace Woodall; and his sister, Katie Stembridge and husband Wayne. Graveside service will be at 10:00am Saturday, October 5, 2019 at Edgewood Cemetery in Lancaster, TX. In lieu of flowers, the family requests memorials be made in Woody’s name to the Central Baptist Church of Lancaster.

The family of Elisha "Woody" Woodall created this Life Tributes page to make it easy to share your memories.

Send flowers to the Woodall family.