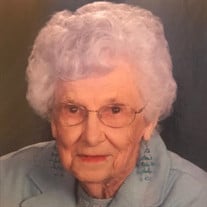 Emma Jo Copeland Jones passed into the arms of Jesus on July 15, 2019 at the age of 94. She was known as Mother, Mammaw, Aunt Jo, or simply Emma to her family, and was a wonderful matriarch to us and a great friend to many. She never met a stranger and always had a positive attitude even in the midst of serious hardships. She grew up on a farm in the East Texas county of Bowie, but picked cotton in West Texas when her family was displaced by the government so that a military munitions plant could be built in that area. They eventually settled in a one-room home in Kilgore, Texas. She then lived the next few decades in East Texas where she reared two sons. Emma worked for Kilgore College, Gibsons on Westmoreland in Dallas from 1976-1988, and M. E. Moses in Lancaster from 1988-1994. When her beloved husband, Oscar Benjamin Jones died on Valentines Day in 1976, she moved to Lancaster, Texas to be near her sons. One of them, Oscar Doyle Jones preceded her in death on March 29, 1992. She grieved the loss, but never let tragedy get in her way. Her love of God, family, and life was evident to all who knew her and she made the world a brighter and happier place to live. She always looked forward to family get-togethers, church gatherings, traveling and any opportunity to celebrate something. Elvis was her hero and, to her great delight, an Elvis impersonator frequently showed up at her birthday parties to sing love songs to her. She was also a devoted Ranger baseball fan, win or lose, that was her team. She was anointed “Fan of the Game” at a Rangers game a couple of years ago. She traveled the United States (including Hawaii and Alaska) with family and friends over the years. She loved flying and cruising which took her to other countries. She requested one final cruise last year and insisted on staying alone in her cabin even though it was a risk with her health but she made it fine in her wheelchair and had a wonderful time. She had a blessed life and will be missed by so many. This week, God decided He wouldn’t leave her with us any longer. He thought it was time for her to be reunited with the friends and family who have been waiting patiently for her in heaven. Emma is survived by her loving family; son Kenneth Bottoms & wife Anne; grandchildren David Carl Bottoms & wife Tonya, Karen Michelle Bottoms Cothran & husband Jason, Kevin Doyle Jones, Oscar Alan Jones, Patricia Sue Jones Mackey; nieces Betty Caudle & husband Frank, Marcie McMillen; nephews Ellery Pippen & wife JoeAnn, Ronnie Pippen & wife Angie; and many friends too numerous to mention. The family is so thankful for the staff at Buffalo Creek Assisted Living in Waxahachie, Texas, who cared for her as if she were their mom. We also want to thank Bristol Hospice for their love and care.

Emma Jo Copeland Jones passed into the arms of Jesus on July 15, 2019 at the age of 94. She was known as Mother, Mammaw, Aunt Jo, or simply Emma to her family, and was a wonderful matriarch to us and a great friend to many. She never met a... View Obituary & Service Information

The family of Emma Jo Jones created this Life Tributes page to make it easy to share your memories.

Emma Jo Copeland Jones passed into the arms of Jesus on July...

Send flowers to the Jones family.