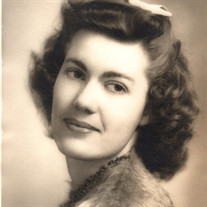 In lieu of flowers memorials may be sent to The Methodist Children’s Home, 1111 Herring Avenue, Waco, TX 76708 or online at www.mch.org Foy Kate Walton Moffett departed this world for her heavenly home on March 4, 2018. Foy was born on September 27, 1918, in Tribbey, Oklahoma, to Dora Burk (Crandall) Walton and Will Kelly Walton. As a child she lived in several Texas towns as her father was a station agent for the Santa Fe Railroad. During her teenage years her family lived in Justin, Texas where she graduated from high school in 1936. Foy continued her education at North Texas Teacher’s College (what is now the University of North Texas) and graduated in 1940 with a Bachelor of Science degree in Home Economics. She moved to Dallas and worked for North American Aviation and Sun Oil Company. Foy married Hamilton C. Moffett on February 11, 1949, beginning a loving and faithful marriage. She became a full-time homemaker devoted to her family. Hamilton and Foy lived most of their life together with their children in Lancaster, Texas, on the Moffett family homestead. Foy was a lifelong Methodist and was a member of First United Methodist Church of Lancaster. They moved to Denton, Texas in 2007 and Hamilton passed away on May 16, 2008. Foy resided in Denton until her death. Foy is survived by one son, Paul Moffett and his wife Jo of Murphy, daughter Kathryn Barns and her husband Steve of Denton; grandchildren Laura Hinckley (David Spotz), LeAnne Mackens (Mike), Matthew Moffett (Sophie), Resa Curbo (Tyler), Will Barns (Michelle), Diana Barns, and Greg Barns; great-grandchildren Ian Hinckley, Clara Hinckley, Mitchell Curbo, Cooper Curbo, Oliver Curbo, Ava Barns, Jaelyn Barns, Levi Barns, Lucas Barns and expected in May, Ezra Mackens; brother Rex Walton and brother-in-law and sister-in-law Carlton and Nancy Moffett and several nieces and nephews. She was preceded in death by her parents, husband, and brother Cedric Walton. Foy was faithful, devoted and loving throughout her long life which God so abundantly blessed and will be missed greatly. Her family would like to thank Vicky Graham and the caregivers at A Joyful Journey and Debbie King and others with Ardent Hospice who provided a special home and loving care.

In lieu of flowers memorials may be sent to The Methodist Children&#8217;s Home, 1111 Herring Avenue, Waco, TX 76708 or online at www.mch.org Foy Kate Walton Moffett departed this world for her heavenly home on March 4, 2018. Foy was born... View Obituary & Service Information

The family of Foy Kate Moffett created this Life Tributes page to make it easy to share your memories.

In lieu of flowers memorials may be sent to The Methodist Children’s...

Send flowers to the Moffett family.