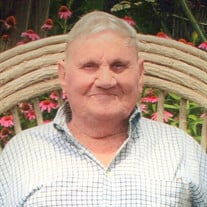 Frank James Moore was born June 18, 1928 to George L. and Virgie Ford Moore in Carrollton, TX. He was the ninth of eleven children. He passed from this life at home in Lancaster, TX on November 9, 2020. Frank attended schools in Lancaster and DeSoto. Meeting his future wife, Loyce Marie Dyess at Tipton Roller Rink in DeSoto. They married in 1947 making their home in Hutchins, TX. This was the beginning of a long, loving journey together. Two daughters came along: Patricia Gail in 1948 and Julie Ann in 1958. In 1971, Frank moved his family to Lancaster. In his early years, Frank did carpentry and floor work. In 1951, he began his career with Chance Vought later known as Ling Tempco Vought. During this time, he was selected to work on the “Stealth Bomber,” a highly secretive government project. After retiring, Frank formed his business, F & L Box Company. It is known that Frank is a “jack of all trades.” He can do anything. The one thing he could never do was be idle; he always had a project going. Over the years, he hand built and made numerous clocks for family and friends. Frank enjoyed the outdoors spending many good times fishing and hunting with family, brothers, brothers in law, and friends. He was always ready for fun and adventure. He gave his life to the Lord early in life. He was a good, loving family man. Frank loved people, and he was loved by all. He enjoyed pulling pranks and jokes on us. He would keep everyone laughing. During this time of loss, many people have said they could hear him laughing now. He certainly made the lives better of all that knew him. Frank loved his granddaughter, Shelly, like his own. When Cole and Holt came along, he finally got his boys. The pride shown on his face. His family grew with Shelly’s girls, Jackqueline and Marcey. Next came Maci and Kylie, Holt’s girls. Finally, Cole gave him another boy, CJ. Jacey started his fifth generation with Caroline, Abigail, Matthew and Madeleine. It’s amazing what Frank and Loyce started! Frank loved his grands and truly knew each one. Ten years ago, we started “Girl’s Day” every Monday. All of the girls spent Monday with Granddad and MeMe. We teased Granddad because he was the only boy. He was thrilled when we added Matthew and CJ to the mix. Those have been happy fun Mondays. We will miss him every Monday. He was preceded in death by his parents; his son in law, Ray Hall; his brothers, Arthur, George, John and Jody Moore; his sisters, Lorine Mahone, Marie Worley, Corine Forner, Ada Mae Denham, Bernice Able, and Lou Davis. Frank is survived by his loving wife of almost 74 years, Loyce Marie Dyess Moore; his daughters, Patricia Gail Briggs and husband Bob, Julie Spradlin and husband Kirk Smith; his granddaughter, Shelly Hall Moran and husband Lucky Louque; his grandsons, Cole Spradlin and wife Erin, Holt Spradlin and wife Liz; his great-grandchildren, Jackquelin Grider and husband Matt, Marcey Posada and husband Paco, Maci Spradlin, Kylie Spradlin, and CJ Spradlin; and his great-great-grandchildren, Caroline, Abigail, Matthew and Madeleine Grider. Frank and Loyce had 74 wonderful years together. They walked together on the path of life, collecting joys and lovely family along the way, sharing them equally just as the shared love and adventure like no other. Family will receive friends from 5:00pm to 7:00pm, Wednesday, November 11, 2020 at Byrum Funeral Home Chapel. Graveside service will be at 11:00am, Thursday, November 12, 2020 in Laurel Land Memorial Park, Dallas.

Frank James Moore was born June 18, 1928 to George L. and Virgie Ford Moore in Carrollton, TX. He was the ninth of eleven children. He passed from this life at home in Lancaster, TX on November 9, 2020. Frank attended schools in Lancaster... View Obituary & Service Information

The family of Frank James Moore created this Life Tributes page to make it easy to share your memories.

Send flowers to the Moore family.