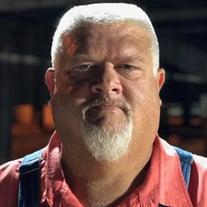 Gary Todd Chaffin, of Combine Texas, was born April 23, 1964 in Dallas, Texas to Gary Franklin Chaffin and Jan Carol Reed. Gary Todd grew up in Lancaster, TX. Upon graduating from Lancaster High School and attending junior college, he joined the Dallas County Sheriff’s Office as a deputy which later led to higher leadership in running the Dallas County Public Service Program. In 1995, he married Cristin Evon Grady, and together they built a home in 2002 in Combine, Texas. In 2004, Gary was gifted from God the greatest blessing he ever knew, his son, Cayden Reese Chaffin. Just a few weeks shy of 25 years of marriage, Gary worked hard to provide for his family and his home he so lovingly referenced as Circle C Farm and was proud to display his emblem anywhere he could for all to see. In later years, Gary was blessed to explore careers that allowed him to pursue things he also enjoyed in his personal life which was any and all things farm related. From tinkering with tractors and equipment, to playing with cows and too many other farm animals to mention, Gary was hooked on all things agriculture. It was this passion that led him to pursue and attain multiple certifications and licensures in these areas. It was also in these occupational pursuits that he would come to be known as “the big guy in overalls” and even more lovingly monikered by close family as “Big Country.” In his 56 short years with us on earth, Gary was truly a loyal, loving and hardworking husband, an absolutely devoted father, and genuine friend to many. He lived a life happily serving others, often volunteering to help before even being asked. He was a fine example of what man should be: kind, loving, helpful and loyal. Gary was preceded in death by his parents and baby brother, Timothy Scott Chaffin as well as his maternal grandparents, William Thomas Reed, Emma Katherine Reed and his paternal grandparents, Frank and Velma Chaffin, and his aunts, Barbara Eppler and Frankie Strohl. Gary is survived by his son, Cayden; his wife, Cristin; his uncle, Jim Tom “J.T.” Reed; his daughter, Jamie Reed; his aunt, Judy and her husband Alan Smith; his cousin, Jimmy Connell and his wife Lynette and daughter Samantha and stepson DJ; his aunt, Jill Reed; his cousin, Kim Morado and her husband Mario Morado and their sons Nicholas and Marcus; and his aunts, Jan Paul, Delores Robinson, and Helen Winkle. He is also survived by his father in law and mother in law, Glen and Carla Grady; his brother in law, Colby Grady and his wife Kelly, and his daughter Carly and stepdaughter Terryn; and numerous other friends and family and cousins that have blessed and enriched his life before leaving this earth for his heavenly home. Graveside service will be at 11:30am, Friday, May 15, 2020 in Edgewood Cemetery, Lancaster, TX.

The family of Gary Todd "Big Country" Chaffin created this Life Tributes page to make it easy to share your memories.

Send flowers to the Chaffin family.