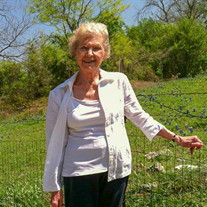 Helen Ruth Hammond Mickelsen was born August 3, 1925, in Dallas, Texas, and passed away peacefully in Tulsa, Oklahoma on December 30, 2018. Helen was brought up in various towns throughout Texas as her mother and grandmother traveled to provide boarding for the many oil industry workers. At age 19, through the efforts of the Red Cross she enrolled in nursing school at the Dallas Methodist Hospital in 1944 with the intention of going overseas to help the war effort. However, the war ended before she graduated, and instead she was assigned to Minnesota to aid the polio epidemic. This is where she met Robert Mickelsen whom she married on December 12, 1952, in Dallas. The Mickelsens lived in several cities in Texas, California, Minnesota and Oklahoma before returning in 1974 to Helen’s roots in Lancaster, Texas. Helen was the 4th generation of Hammonds to live in Lancaster. After Bob died in 1986, Helen’s sister Nance Hammond also returned to Lancaster and moved in with Helen. They were constant companions until Nance’s passing in 2007. A great joy in Helen’s life was discovering that she had a half-sister, Maxine Crow, and through Maxine many other Arkansas cousins, nieces and nephews. Helen is preceded in death by her husband Robert T. (”Bob”) Mickelsen, sister Nance Hammond, and her sons Robert Norman (“Mike”) and Kenneth Lee (“Kenny”) Mickelsen. She is survived by her daughter Nancy Marie Hoffmann and husband Thomas, her grandchildren Joy Hancock and husband Tim, and Matthew Hoffmann. She is also survived by her sister Maxine Crow and family, and the many beloved “Texas cousins.” According to grandson Tim, Helen was the “personification of grace,” and that is how we will always remember her.

Helen Ruth Hammond Mickelsen was born August 3, 1925, in Dallas, Texas, and passed away peacefully in Tulsa, Oklahoma on December 30, 2018. Helen was brought up in various towns throughout Texas as her mother and grandmother traveled to provide... View Obituary & Service Information

The family of Helen Ruth Mickelsen created this Life Tributes page to make it easy to share your memories.

Send flowers to the Mickelsen family.