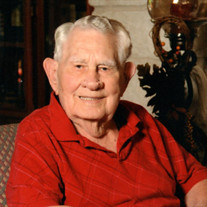 Hubert Newton Holland passed away Friday morning, July 6, 2018. He was born January 23, 1928 in Houston, Texas to Lewis T. and Beulah Harris Holland. He attended elementary school in Cameron and Waco graduating as Valedictorian of the 1945 class of LaVega High School in Bellmead, Texas. He attended Baylor University before serving in the United States Navy Air Corp from which he was discharged as Aviation Electrician Third Class Petty Officer. He then returned to Waco and began his 40-year career with Texas Power and Light Company. In 1949, he met the love of his life, Sylvia Smith of Chilton, Texas, who was in Nurses’ Training at Hillcrest Hospital and Baylor University. They were married in 1950. They traveled the North Texas area on construction crews the first two years of their marriage and then lived in Elm Mott, Texas for 9 years while he served as Storekeeper for Texas Power and Light in Waco. He was then transferred to the General Office in Dallas in 1961. He served the next 26 years as General Storekeeper and Assistant Purchasing Manager, retiring in 1987 as Manager of Purchasing. He also served as a Director of the Dallas Electric Club. He and Sylvia traveled to 48 states, missing only Maine and North Dakota. She was always by his side helping him in all he undertook until her death on Mothers’ Day in 1995. Hubert was a member of First Baptist Church of Lancaster, Texas since 1961 where he served as a Sunday School teacher, Department Superintendent, President of the Brotherhood, Training Union Director, and Chairman of Deacons. Hubert enjoyed traveling, golfing, hunting, and fishing. The family enjoyed many happy times at their lake house on Lake Bridgeport. He enjoyed traveling with his daughters and son-in-law to the Grand Cayman Island, Lake DeGray in Arkansas, and cruises to the Caribbean and Alaska. For the past 4 years and 7 months, he lived at Atria Assisted Living in Grand Prairie where he was very involved in all activities and made many very dear friends. He was the organizer of their Tuesday and Thursday night 42 group. Many caregivers treated him like their own Daddy, the dining staff knew his order before he even came to the table, and the Activity Director, Bernice Guerra, could get him to do anything. They enabled him to have a rich, quality of life and all of us will always love them for that. Hubert is survived by two daughters, Connie Jo Holland of Arlington, Texas and Sheila Dianne Fabre and husband Rodney of Allen, Texas; sister Doris Bradshaw of Valley Mills, Texas, brother Thomas A. Holland and wife, Linda, of Arlington, Texas; and nieces and nephews. He was preceded in death by his brother, Robert L. Holland of Temple, Texas. He will be dearly missed but always remembered with love by his family. Services will be held Monday, July 9; visitation 10:00 and service 11:00 at Byrum Funeral Home Chapel in Lancaster, Texas with Pastor Richard McKay officiating. Interment will be at Edgewood Cemetery in Lancaster, TX. Pallbearers are Rodney Fabre, Dewey Gordon, Arnie Knecht, Paul Houser, Fred Oberlander, and Bob Stevenson. Honorary pallbearers are Malcolm Watson, Elwood McElveen, Charlie Waller, and members of his Sunday School Class.

Hubert Newton Holland passed away Friday morning, July 6, 2018. He was born January 23, 1928 in Houston, Texas to Lewis T. and Beulah Harris Holland. He attended elementary school in Cameron and Waco graduating as Valedictorian of the 1945... View Obituary & Service Information

The family of Hubert Newton Holland created this Life Tributes page to make it easy to share your memories.

Send flowers to the Holland family.