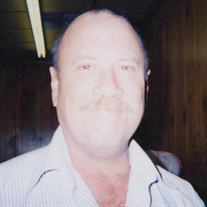 Hugh Mac Ashley, Jr. was born July 19, 1960. His mother’s labor started about 7:00 pm on the 18th at their home in Lancaster, TX, and about midnight, Dr. Strother said, “Bring her into Baylor Hospital in Dallas.” Labor continued about another 15 hours until his birth at 3:18pm. Maybe he was so long in labor because his birth weight was 9 lbs. 4 1/2 oz. Some of Mac’s childhood was spent in Jacksonville, Fla and some in Dallas, TX, until he finished school in Lancaster. Shortly after completing school, he joined the Army. His service time included a tour in Germany before his Honorable Discharge in July 1981. Back in the States, Mac met and married Nadine Hopper (3/26/1986) and became a father to Erika and Stephen. Then, they added their daughter, Melinda Michelle, born on November 18, 1989. Life for Mac became difficult in the 1990’s after he and Nadine divorced. He injured his back and became disabled. His disability caused him to be limited in his ability to work. He became a bartender where he enjoyed getting to know the patrons. Life became ‘’rosy” again when he met Elizabeth Taylor. They were married on January 14, 2002 and lived happily for each other until his death on June 26th, 2020. Mac is survived by his wife, Elizabeth; his son, Stephen Hopper of CA; his daughters, Erika Hopper and Melinda Ashley both of Utah; his grandchildren, Madison Paige Hopper, Jacob Michael Hopper, Peighton Webb, Joshua Dylan David, Phynley Hopper, Parker Webb, and Tyson Webb; his mother, Juanita Cooper of Italy, TX; his father and step-mother, Hugh Mac and Linda Ashley, Sr; his sister, Donna David of Italy, TX; his brothers, Robert Ashley of Mesquite, TX and Arnold Cooper of Allen, TX. The memorial service will be held on Friday, 10:00 am on July 31,2020 at Byrum Funeral Home at 425 N. Dallas Ave. Lancaster, Texas. Following the memorial service, Mr. Ashley, a proud veteran of the U.S. Army, will have his ashes interred with military honors at DFW Veterans Cemetery.

The family of Hugh Mac Ashley Jr. created this Life Tributes page to make it easy to share your memories.

Send flowers to the Ashley family.