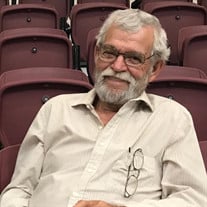 James Lloyd Brown, born September 4, 1941 in Corsicana, Texas and passed away Saturday, January 23, 2021 in Houston, Texas. Preceded in death by his mother Clara Bertha Brown nee Burttram, father Gus Welden Brown, brother Eugene Brown, brother Julian Brown, sister Verlene Long nee Brown, sister Faye Jackson nee Brown, and brother Robert Brown. Survived by his wife, Amy Brown nee Hibdon, sister, Joyce Coate nee Brown, his niece, Joan Bowman nee Long and her husband Rodney Bowman, his nephew, Hoyt Long, and his wife Marsha Long nee Goddard, his niece Karen Trujillo nee Young, and her husband Robert Trujillo, and nephew John Young, and his wife Mary Young nee Jeffers, and Carrie Primm nee Jackson and husband Buster Primm and numerous great, great great, and great great great nephews and nieces. Celebration of his life will be on 12th day of February, 2021 at 3:00 pm at the chapel of Byrum Funeral Home, 425 N. Dallas Ave, Lancaster, Tx. James first lived in Emhouse, Tx and started grade school and graduated in Lancaster, Tx. Helping his father he learned to farm and picked cotton in his youth and worked for Minyards grocery stocking and carrying groceries. After he graduated high school, he went to work for Neuhoff Meat Packing Co in Dallas where his brother-n-law Arthur Long helped him find a job. Not liking this job, he went to work for Texas Instruments where he became an electronics technician. He remained there for about 10 years except for a leave when he enlisted in the US Army during the Vietnam War where he became a military policeman. During this enlistment he was stationed primarily in Stuttgart, Germany. He left TI to become an independent trucker and worked at this until he retired in 2001. Then he returned to farming and ranching in East Texas until his death. James had a lifelong interest with anything that contained a motor from an automobile to a chainsaw. He was a Nascar fan who admired Bill Elliott and others. He never lost his love of working on the farm and enjoyed returning to the country raising cows. Another love was traveling which he experienced during his trucking years. He loved exploring the United States. His favorite places to travel were in the mountains of Colorado where he jeeped, camped and rode ATVs in the Big Blue Wilderness. In later years he loved trips with his wife to beaches in Mexico and the Caribbean. James was very compassionate and loving, giving of himself freely to help friends with their projects and friends in need. James was raised in the Church of Christ and had a deep abiding faith in the lord. He was strong and stoic and fought a hard and valiant battle to overcome his illness but his hour had come and he accepted God's grace and joined him and his loved ones in heaven. He was loved by many and will be dearly missed.

The family of James Lloyd Brown created this Life Tributes page to make it easy to share your memories.

Send flowers to the Brown family.