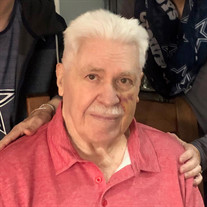 James E. “Heavy” Barber was born September 15, 1939 and passed away April 21, 2020. Heavy was born and raised in Dallas. He graduated from North Dallas High school in 1958. In High School, Heavy excelled in both football and track and field. Upon graduation from North Dallas High School, he attended Southern Methodist University on a football scholarship and also pursued track and field. Football would ultimately win out as he was drafted by the Philadelphia Eagles just prior to graduating from SMU. His career with the Eagles would be short lived due to the birth of his daughter. Upon returning to Dallas, Heavy took a job with an ambulance company and would soon start a career with Pierce Chemicals Morticians Supply Company where he became the Manufacturing and Operations Manager. He spent approximately 17 years with Pierce Chemicals before taking his expertise in manufacturing to Carrington Laboratories. Heavy was also employed with the Aloe Science Council where he would have the opportunity to travel worldwide. Upon retirement, Heavy worked for Chase Couriers to stay active. He enjoyed his time as a courier as he got to meet many people and would never hesitate to ask, “what’s in the box.” Heavy would soon have to completely retire due to some physical challenges with bad knees from the old football injuries. Throughout his life, Heavy was a member and Past President of the Oak Cliff Optimist Club and was actively involved in the Soap Box Derby. He was a former member of Texas Funeral Directors. Heavy was an avid sportsman and continued this passion throughout his life. He spent much of his time hunting and fishing in and around Texas but traveled to Alaska, Mexico and Central America as well. He enjoyed sharing his experiences with his children and taught them to enjoy the outdoors. More recently, Heavy found a good recliner, remote control, and big screen tv with countless sports channels, TV Land, TBN and the Game Show Network was the best retirement not to mention a side table of snacks and his kids bringing home ice cream. Heavy is preceded in death by his father and mother, Joseph Elvin Barber and Juanita Dunn Barber, and daughter, Janet Kimberly Westmoreland. He is survived by his brother, Robert “Bobby” Barber, of Irving; sister Susie Branch of Dallas; the mothers of his children Nancy and Jana Barber; daughter, Janey Hood and son-in-law, Greg, of DeSoto; sons, Justin Barber of Carrollton and Jordan Barber of Mesquite; grandsons, Joshua Hartsell of Waxahachie and Colton Hood of DeSoto; two great grandchildren and many nieces and nephews. Heavy was a blessing to all who knew him and will be greatly missed.

The family of James E. “Heavy” Barber created this Life Tributes page to make it easy to share your memories.

Send flowers to the Barber family.