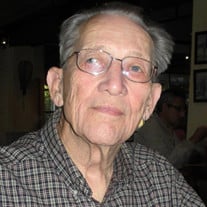 James V. Griffin Jr., age 89, passed away Thursday, July 16th, 2020. He is survived by his wife of 64 years, Anita Joyce (Periman) Griffin; his daughters, Eva Burrow and husband Randy Burrow, Karen McClary; his son, Darrell V. Griffin and wife Tiffany Griffin; 5 grandchildren; and 7 great grandchildren. Mr. Griffin was preceded in death by his son, James David Griffin in January of 2003. James was born and raised in Lancaster, TX, the son of James V. Griffin Sr. and Bessie (Harrison) Griffin. Mr. Griffin went to work for Southwestern Bell Telephone in 1949 at the age of 18.  He was drafted into the US Army and served in Germany as a crane operator from 1953 to 1955.  Upon his return, he resumed his work at Southwestern Bell. James started writing letters to Anita while he was in Germany.  They met through James’ brother, Bill who was married to Anita’s sister, Margaret.  Upon his return to the states, James started dating Anita and they married December 23rd, 1955. James continued to work at Southwestern Bell after his return from Germany and worked there until 1985 when Southwestern Bell was split up. After the split, he moved to AT&T.  He retired with 38 years of service at Southwestern Bell and AT&T. James served on the board of directors for the First United Methodist Church of Lancaster for several years. He served in leadership for the Boy Scouts of America Troop 140 from 1982 to 1986.  He accompanied the troop to Camp Pioneer every summer during those years and worked with his son, Darrell to become an Eagle Scout. James was a wonderful husband, father, grandfather and great grandfather. He was the epitome of a family man and always put the needs of others before his own. He will be missed by family and friends alike. Services will be held Monday, July 20, 2020 at Byrum Funeral Home in Lancaster, TX at 12:00 pm. Due to the Covid pandemic, only immediate family members are allowed to attend. In lieu of flowers, please donate to the Alzheimer’s association. https://tinyurl.com/y39sc52l https://act.alz.org/site/TR/Events/Tributes-AlzheimersChampions?pg=fund&fr_id=1060&pxfid=636496

The family of James Vinson Griffin Jr. created this Life Tributes page to make it easy to share your memories.

Send flowers to the Griffin family.