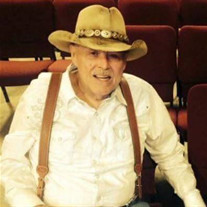 James Edwin (Jim) Weaver was born in Dallas, Texas on May 31, 1941 to Jack and Martha Viela Weaver. He passed from this life on January 10, 2018. Jim had a larger than life personality and was always the center of attention wherever he went. He was the youngest recruit ever in the United States Air Force at the time of his enlistment in 1958 at the age of 17. He served four years in America and Germany, where he was military police and patrolled with his beloved dog, Blitz. He was also the lead singer in a band that played NCO clubs as well as local nightclubs around Hahn Air Force Base. Upon returning to the states and re-joining civilian life, Jim held a series of jobs, mostly in sales. He met and married Cynthia Anne Carpenter in 1966 and began a family. In 1977, Jim and Anne formed a duo and began performing in Dallas area nightclubs, which they continued for twelve years. They were one of the top paid groups in the metroplex and combined country music with ad lib comedy that delighted crowds for years and had people waiting in lines to get in the doors. They recorded two albums, one in Nashville and one live album. Jim wrote the Super Bowl 6 and Super Bowl 12 theme songs for the Dallas Cowboys and was featured on local news channels and even performed at one of the playoff games prior to Super Bowl 12. He was a prolific song writer and after moving to Nashville in 1989, had several songs recorded including “Abilene On Her Mind” by Buddy Jewell on Sony Records. After a divorce in 2001, Jim moved to Odessa, Texas and worked for an old friend as Director of Franchise Development at American Lenders Company. He retired from ALC in 2007 and moved back to Nashville with his daughter and granddaughter. In 2009, he moved to Florida and was roommates with one of his best friends. In 2014, he moved home to Dallas and resided there until his passing. In addition to song writing, Jim was an extremely talented leather craftsman. He designed guitar straps, money clips, purses, wallets, etc. He also invented the “Rode Hard” cowboy hat and received orders from the likes of Kenny Rogers and Toby Keith. In his last few years, Jim performed at several local Opry shows, including the Red Oak Opry and the Wylie Opry. His voice was still as strong and pure as it ever was. Jim was preceded in death by his parents, his older brother, Billy Jack and his wife, JoAnn, and his niece Kim Weaver. He is survived by his children, Kristi, Jeff and Todd and grandchildren, Lindsi, Jordan, Lauren and Jack. He is also survived by his brother, Ron and Beth Weaver, his sister, Liz and Ronnie Nugent and a host of cousins, nieces and nephews: Deby and JoeEd Crawford, Tammy Bishop, (Dylan and Elisabeth), Roger & Smiley Weaver, Greg Weaver, Brian and Renee Nugent, (Morgan and Gracie), Clay and Candice Nugent, (Rylee, Jaxx and Landree “Lil Debbie”), Wendi and Curtis Miller, (Justin, Nichole and Jace), Mandi and Nathan Coppock, (Braylee and Marlee), Hayli and Stacey Carpenter, (Cayli), Zack and Brittany Crawford, (Weston and Jolee “little Ginger”,) Josh and Asha Rigsby, Cassie and Ashley Rigsby. Please feel free to join us for the Celebration of Life for Jim Weaver, which will be held at Bells Chapel Weddings and Events, 320 Bells Chapel Road, Waxahachie, TX 75165 on Saturday, January 20th, 2018 from 2:00 to 6:00 PM. In lieu of flowers, donations may be made at: American Diabetes Association Online: www.diabetes.org By Phone: 1-800-342-2383 By Mail: PO Box 15829, Arlington, VA 22215 In Memory of James “Jim” E. Weaver Or Wounded Warrior Project Online: www.woundedwarriorproject.org By Phone: 1-877-832-6997 By Mail: PO Box 758517, Topeka, KS 66675 In Memory of James “Jim” E. Weaver Acknowledgements to Kristi Weaver ([email protected])

James Edwin (Jim) Weaver was born in Dallas, Texas on May 31, 1941 to Jack and Martha Viela Weaver. He passed from this life on January 10, 2018. Jim had a larger than life personality and was always the center of attention wherever he went.... View Obituary & Service Information

The family of James "Jim" Edwin Weaver created this Life Tributes page to make it easy to share your memories.

Send flowers to the Weaver family.