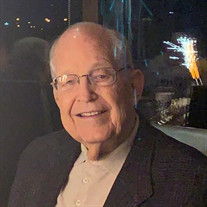 James Rayford Plumlee was born in Irving, TX on February 13, 1934, the oldest son Ralph and Stella Mae Plumlee. Jim grew up with older sisters, Marvel Austin and LaRue Bevier and younger brother, Ralph Plumee. He graduated from Sunset High School in 1951 and matriculated to Texas A&M, from which he graduated in 1956. After graduation, Jim moved to Chicago, Illinois and worked as a missile lieutenant for the army. He eventually returned to the Dallas area and joined the family business, Weben Industries, as an engineer and in sales. Jim was married to Betty Ann Plumlee. They had a son, Mike, and a daughter, Sara. On June 26, 2003, Jim married Joyce 0 Leath. Jim helped Joyce run a bed and breakfast in Winnsboro, TX. After full retirement from the bed and breakfast, they moved back to Dallas at which time Jim assisted his son, Mike, with his financial planning company. Jim joined Grace Lutheran (WELS) in Scroggins, TX while he and his wife managed their bed and breakfast. Upon their return to Dallas, they attended Calvary Lutheran Church in Lake Highlands. While at Calvary, God's grace was brought to bear on Jim's life through the remembrance of his baptism, the regular assurance of forgiveness at worship, and in the building up of his faith through the reception of the Lord's Supper. Through these means of grace, Jim was sustained in his faith in Jesus. Jim relished the forgiveness of sins and eternal life God had given him as a gift of grace. In love for his Savior, Jim served Calvary congregation in various capacities, including Church Council secretary, chair of the Board of Elders, first chair of the Calvary Endowment Committee, and organizational lead for Men's Bible Study. On Sunday, February 20, 2022, after a two-year struggle with stage four kidney failure, Jim was called home by his heavenly Father. He was preceded in death by his parents, Ralph and Stella Mae, and by his sisters LaRue and Marvel. He is survived by his wife, Joyce, her son, Keith (Lois) and daughter, Noelle; his son, Mike (Courtney) and daughter, Sara; brother, Ralph; and multiple grandchildren. All praise and thanks to our Lord Jesus Christ, who gave his life to forgive all sins, who claimed Jim as his own dear child through water and the Word, and who will return to bring Jim and all believers in Christ, body and soul, to live in the eternal glories of heaven. Memorials can be given to the Endowment Funds of Calvary Lutheran Church.

The family of James Rayford Plumlee created this Life Tributes page to make it easy to share your memories.

James Rayford Plumlee was born in Irving, TX on February 13,...

Send flowers to the Plumlee family.