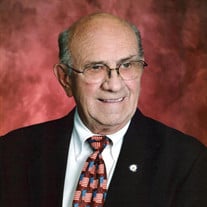 James Edwin “Jim” Stallings was born June 17, 1931 in Dallas, TX to Louie and Dessie (Patrick) Stallings and passed from this life on June 24, 2020 in Waxahachie, TX. Jim was an incredible man who was full of life and loved to be involved in his community. He was a deacon at the First Presbyterian Church of Lancaster, a member of the Lancaster Lion’s Club, Scottish Rite of Dallas, and a Mason at the Masonic Lodge #160 in Lancaster. Not only was he involved in community, but he was also extremely devoted to serving the community. He first worked his way up to Sgt in the US Marine Corps serving in the Korean War. Upon his honorable discharge, Jim began a long career as a firefighter and retired from the Dallas Fire Department with 32 years of loyal service. He was preceded in death by his beloved wife of 49 years, Eloree. Jim is survived by his son, Patrick S. Stallings and wife, Lora; his son, Scott E. Stallings and wife, Rachel; his grandchildren, Jennifer, Courtney, Sarah, Bree Anne, Brent, Chelsie, Marcie, and Jeremy; his 10 great-grandchildren; and his step-sister, Wanda Stallings Pederson. Jim will be laid to rest with his beloved Eloree at DFW National Cemetery in Dallas, TX.

The family of James Edwin "Jim" Stallings created this Life Tributes page to make it easy to share your memories.

Send flowers to the Stallings family.