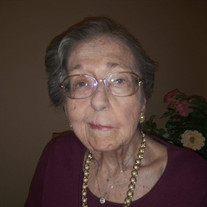 Jeffy G. Watkins passed away in the loving arms of Jesus on October 23, 2021 at the age of 87. She was known as Granny to her three Grandchildren and one Great Grandchild. Jeffy grew up on a farm in Ellis County. Why the name Jeffy? Her Mother liked the name, because it was different. Her father grew vegetables, had an orchard of pears, peaches and plums, he also bred pigs, sheep and cows to sell. Her father found a job outside of the farm and went for training and moved to Dallas. When she was 15 years old she met her husband, Jess R. Watkins. She went to a local ice cream parlor, in Dallas, and was eating ice cream when a sailor(Jess) walked into the store and went behind the counter and started moving things around. Mom told him that customers were not allowed behind the counter. The sailor asked her out on a date and she turned him down. He found out where she lived and went to her house and asked her parents if he could take her out to dinner and the rest is history! She was married to Jess R. Watkins for 62 years. Once they got married, they moved into a trailer in Arlington. They moved from there to a house on Barker Street in Arlington. Her husband worked in Aerospace so they moved around a lot. They lived in Colorado, Texas and California. In between all of the moving she reared three children. Her hobbies were reading, painting and going to garage sales. She was known at the assisted living facility as the “Reading Lady”! She survived brain surgery to remove a tumor that was attached to her brain stem and the prognosis was grim, but it was a miracle that she survived. She lived with a second brain tumor which caused her a lot of pain until her passing. In 2013, her husband, Jess R. Watkins and son Dennis E. Watkins, both passed away one month apart unexpectedly. Jeffy never did recover from the loss and died of a broken heart. She had a blessed life and will be missed by so many. God decided He wouldn’t leave her with us any longer. He thought it was time for her to be reunited with the friends and family who have been waiting patiently for her in Heaven. Jeffy is survived by her loving family; daughters Linda Hicks and Susan Watkins and three Grandchildren, Jennifer, Brian and Natasha and one Great Grandchild Alistair. Caregiver and friend, Anna Garza, Jeffy’s sister Paula Burden and her brother Ronnie Sartain. Jeffy’s remaining years were enriched by her caregiver and friend, Anna, and we are so very grateful for her love and devotion to our Mother. Family will receive friends from 10:00AM to 11:00AM on Wednesday November 3, 2021 at Byrum Funeral Home Chapel with services beginning at 11:00AM also in the chapel. Interment will follow at Edgewood Cemetery in Lancaster, Texas.

Jeffy G. Watkins passed away in the loving arms of Jesus on October 23, 2021 at the age of 87. She was known as Granny to her three Grandchildren and one Great Grandchild. Jeffy grew up on a farm in Ellis County. Why the name Jeffy? Her... View Obituary & Service Information

The family of Jeffy Glynn Watkins created this Life Tributes page to make it easy to share your memories.

Jeffy G. Watkins passed away in the loving arms of Jesus on October...

Send flowers to the Watkins family.