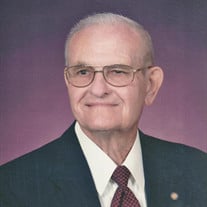 Joe E. Dugger Born 10-18-1930 in Hillsboro, Tx. and passed away 2-8-22 in Waxahachie, Tx. He was preceded in death by his parents, Thomas Buford Dugger and Mamie Lee Fowler, his wife, Dorothy Lusk Dugger, son Joie Dave Dugger and daughter-in-law Marcie Dugger, His beloved sisters, Arlene Kennedy, Ruth Statum, Marion Hettich and Lou Lawler. Stepsons, Bobby and Michael Varner, Grandchildren, Colton Varner and April Marner-Heileman. Granddaughter, Kate Dibble. He is survived by his wife, Robbie Nell Dugger, son-Richard Dugger, daughter Rhonda Thomas and husband Robert Thomas, grandson, Nathan Bloodworth and wife, Courtney, his granddaughter Brooke Pike and husband Dillon. Stepsons, Gary Varner and wife Kelly, Terry Varner and wife Sheila. Grandchildren- Heather Thomas, Phillip Varner, Garrett Varner and wife, Haley, Courtney Varner, Colton Varner, Michael Varner and wife, Brittany, Chris Varner, Kevin Varner, Megan Varner, Ted and wife Ashley, and Tyler Varner. Great grandchildren, Prezleigh, Ruth and Willow Bloodworth, Skylar Lyons, Brantley and Ty Pike and Ethan Burden, Lyla, Michael and Makenna, Conleigh, Leighton and Keaton Plus, he had just been blessed with 4 more Great Grandchildren that he did not get to meet, Brylee, Hunter, Remington and Braxley and & beloved nieces, nephews, cousins and friends. Joe had three loves...God, family, country and just in that order. Joe was a member of Farley Street Baptist Church here in Waxahachie and had been members of a few different Baptist Churches here in the Ellis County, DFW area. He always put his faith in God. One of his final words to his family was that God sure had been good to him. Oh, how he loved his family. His children, grandchildren and great grandchildren were his pride and joy. He was good to all of them. He would tell them that he loved them so good. They put a smile on his face every time he saw them. Joe was blessed to have 2 very special ladies in his life. He was married to his first wife, Dorothy for 47 years until her passing and has been married to Robbie for 20 years. Both of these ladies had his heart. He loved both of them unconditionally. Joe often spoke of his parents, grandparents, sisters and uncles, aunts and cousins. He loved them so. What a joyous reunion in Heaven it must be right now. Joe served 39 years in the United States Air Force. He knew that without protecting his country, his family and our freedom to Worship would be in jeopardy. He loved his country. While saying his final goodbyes to his family, he had them all gather round and sing God Bless America with him and he sang it proudly. Joe was born a farmer, working the lands right here in Waxahachie, Red Oak and Hillsboro. He worked the lands with his Daddy and his Uncle Ralph Dugger. He said it was hard work, but he loved it. Later when Joe had a family of his own, he would always have a big garden in the spring and enjoyed working it. Later in his 20's he decided to join the Air Force. He did many missions during this time including Germany, Panama and El Salvador. He worked on the flight line as mechanic and worked his way up to Chief Master Sergeant. He was proud of his days in the service and had many lifelong friends stem from this time and always held them in the highest regard. He never believed in UFO's, but he said that he sure had worked on some strange equipment thru the years. Joe had been battling Parkinson’s and congestive heart failure for years. He was the strongest man his family and friends had ever known. He was courageous, hardly ever complained. Always putting his family first. He fought a good fight and lived a good life. God gave us this wonderful man. As many have said, he is the greatest man that they had ever know. The kindest heart and a man's man. There will never be another like him. The void is great, but because he was covered in the blood of Lamb, we will see him again. When you look to Heaven, look for the brightest star. That will be Joe shining down on all of us. Family will receive friends on February 11th, 2022 from 5-7 pm at Byrum Funeral Home, Waxahachie, Tx. Celebration of life will be February 12th at 11:00 a.m. Graveside immediately following at Red Oak Cemetery Following Graveside, Refreshments will be served at 2:00 at VFW post 3894. Family and friends are all invited.

The family of Joe E. Dugger created this Life Tributes page to make it easy to share your memories.

Send flowers to the Dugger family.