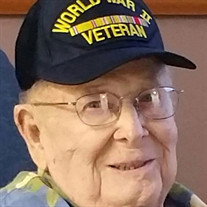 RAWLINSON, Joe was born August 10, 1920 in Cushing, Texas to Elmer and Nannie (Carlisle) Rawlinson. He passed peacefully from this life on July 18, 2016, in his home, surrounded by his loving children. In 1936 he graduated from Cushing High. Joe excelled in sports and played catcher for the semi-pro team Sardis Cats. He was drafted into the Army and served in the Signal Corp. Joe survived Iwo Jima and was awarded a Bronze Star for his service. On March 8, 1942 he married the love of his life, his wife of nearly 74 years, Myra L. (Hassell) Rawlinson, at Adams Chapel Methodist Church in Bulah, TX. In 1947 Myra and Joe moved to Lancaster, TX where he still lived. In 1942 Joe acquired his Master Electrician License that he maintained until his passing. Joe worked for Hengy Electric, Howard P. Foley, Fishbach & Moore, and Harrill Electric. He was the Project Manager for Texas Power and Light, building nineteen hydro electrical plants in Texas. As Project Manager for W.B Moore Company, he led projects for the Trident Submarine Training Facility in Kings Bay, Georgia, the General Dynamics Stealth Research Facility in Fort Worth, Texas, and the multiple hi-rise IBM complex in Austin, Texas. In 1978 he started Rawlinson Electrical Consultants. As a traditional commercial and industrial electrical contracting firm, they won projects at a national level. One of his favorite projects was the remodeling five thousand 7-11 stores that led to a relationship with Brinker International and other restaurant owners with projects in Chili’s, Johnnie Carino’s, On the Border and Macaroni Grill. In 1992 he was appointed Chairman of the Electrical Advisory and Appeals Board for the City of Lancaster. In 1969 Joe started to acquire land to raise cattle in Bulah, TX. The farm was his greatest joy and his favorite past time. Joe was a 32 Degree Mason for 69 years and active with the Lancaster Lion’s Club. Joe was a member of Adams Chapel Methodist Church in the Bulah Community of East Texas and the First United Methodist Church of Lancaster, TX. Joe was preceded in death by his parents, wife Myra Rawlinson, daughter Elaina Jo, and sister Dorothy English. He is survived by daughter, Diana Gayle May & partner Laura Doscher; son, Joe “Chip” Rawlinson, Jr. & wife Jennifer; grandchildren, Joshua May & wife Aimee, Mika Earthspirit & husband Matthew, Clay Rawlinson, and Drew Rawlinson; brother-in-law, John Herbert Hassell & wife Retha; sister-in-law, Betty Sue Miller & husband Royce; and many beloved nieces and nephews. Visitation will be 6:00 pm until 8:00 pm Wednesday at Byrum Funeral Home in Lancaster. The graveside service will be 11:00 am Thursday at Russell Cemetery on Rt 23 in Rusk, Texas.

RAWLINSON, Joe was born August 10, 1920 in Cushing, Texas to Elmer and Nannie (Carlisle) Rawlinson. He passed peacefully from this life on July 18, 2016, in his home, surrounded by his loving children. In 1936 he graduated from Cushing High.... View Obituary & Service Information

The family of Joe F. Rawlinson created this Life Tributes page to make it easy to share your memories.

Send flowers to the Rawlinson family.