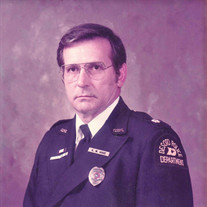 Kenneth Wayne Hood, Chief Hood, was born August 14, 1934, in Dallas, Texas and passed away, in Duncanville, Texas on August 16, 2019 at the age of 85. Kenneth started his career in 1951 by serving in the United States Navy. He served during the Korean War as a First Class Petty Officer aboard the USS Collette. At the completion of his military career, he returned home and continued his public service as a Dallas Police Reserve Officer, Volunteer Fireman, Fire Marshall for the City of DeSoto, and Night Dispatcher for the DeSoto Police Department. All of this while working full time at Dallas Power and Light (DP&L). Kenneth would retire from DP&L and become full time with the DeSoto Police Department where he served as a Detective, and Police Lieutenant. In 1974, Kenneth was appointed to Police Chief of the DeSoto Police Department where he served the citizens of DeSoto until 1985. After leaving the DeSoto Police Department, Kenneth would continue his career as a Police Officer for Dallas County Community Colleges at the Cedar Valley campus while also teaching Technology at the same campus until his retirement in 2000. Kenneth received many honors during his public service career to include the DeSoto Jaycees Man of the Year in 1968 and DeSoto Policeman of the Year in 1973. Kenneth is preceded in death by his wife and one true love, Elsie Louise Vincent Hood. Kenneth and Elsie would meet when he returned home from the military. They married in 1956 and were married 43 years until her death in 1999. Kenneth is also preceded in death by his parents Thomas Burlon Hood and Erma Lay Hood, and stepbrother Jerry Phy. He is survived by his son Greg Hood and wife, Janey, of DeSoto, Texas, and son Vince Hood and wife, Diane, of Cedar Hill, Texas; brothers, Bill Hood, Monty Hood and Billy Phy; stepmother, Julia Hood; grandchildren, Whitney, Cannon, Colton, Devyn, Maddison, and Grayce Hood; along with four great grandchildren; brother-in-law Thomas Vincent; many nieces and nephews, as well as many friends. The family will receive friends Tuesday, August 20, 2019 from 6:00pm to 8:00pm at Byrum Funeral Home. Services will be Wednesday, August 21, 2019 at 2:00pm in Byrum Funeral Home Chapel.

Kenneth Wayne Hood, Chief Hood, was born August 14, 1934, in Dallas, Texas and passed away, in Duncanville, Texas on August 16, 2019 at the age of 85. Kenneth started his career in 1951 by serving in the United States Navy. He served during... View Obituary & Service Information

The family of Kenneth Wayne Hood created this Life Tributes page to make it easy to share your memories.

Send flowers to the Hood family.