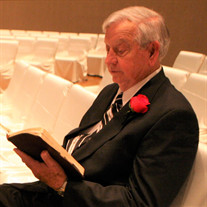 Kenneth Carl Istre closed his Bible for the final time on November 4, 2019 in Dallas, Texas. His daily life for the past 90 years was a living testimony of his faithfulness and love for the Lord. He was a man that enjoyed family, people, and life. Kenneth was born on Feb 8, 1929 in Jennings, Louisiana to Ivy Joseph Istre and Betty Valdetero Istre. He attended Jennings High School and during this time his desire to help people and share his faith was evident. Kenneth began to lead singing at his local congregation and soon accompanied his father on revivals. On one occasion, at Hayden’s Grove in Amite, his father became ill and Kenneth not only led the singing but delivered the sermon. The bonds made at Hayden’s Grove would span well over 70 years. While in high school, Kenneth excelled receiving many athletic awards which led to football scholarship offers at the collegiate level. After seeking advice from his parents and hours in personal prayer, he chose to focus in the field of ministry and education. This led him to Harding College, Kentucky Bible College and East Tennessee State University where he received a bachelor degree. He continued his ministerial studies receiving a Master of Theology from Dallas Theological Seminary. Kenneth married his childhood sweetheart, Betty Jane Reddell, on December 26, 1950. Their 39 years of happiness started in Johnson City, Tennessee where Kenneth stepped into the pulpit and began his life of fulltime ministry. In 1953, Kenneth and Betty moved to Dallas, Texas where he began mixing his talents of teaching and preaching. He was not only a fulltime minister, but was a teacher and administrator at East Dallas Christian School. His love and caring for people brought him great success. In 1964 Kenneth and Betty returned to South Louisiana as their ministry in Amite began. Kenneth also taught high school, coached, and enjoyed farming during his time in Amite. In 1979 Kenneth and Betty returned to Jennings to be with their aging parents. Kenneth returned to his alma mater, Jennings High School, where he was a teacher and coach while preaching at Abbeville Church of Christ. After the passing of Betty in 1990 Kenneth continued teaching, preaching and taking care of people in need while living in Jennings. Kenneth married Patsy Green Field on November 26, 1991. Their 26 years of happiness began in Jennings and then Watson and Hammond. Kenneth taught high school, college and preached at Hayden’s Grove and Shiloh until his health declined in 2015. Kenneth also became involved in the lives of Patsy’s children and grandchildren. After the passing of Patsy in 2018 Kenneth moved to Dallas, Texas where he continued to be a great encourager to others. Kenneth’s ministry spanned over 64 years, from 1951 to 2015. His enthusiasm for sharing God’s word never seemed to grow dim. The churches he served as minister were Locust Street Church of Christ, Johnson City, Tennessee; Piedmont Church of Christ, Dallas, Texas; Amite Church of Christ, Amite, Louisiana; Big Creek Church of Christ, Arcola, Louisiana; Hayden’s Grove Church of Christ, Amite, Louisiana; Abbeville Church of Christ, Abbeville, Louisiana, and Shiloh Church of Christ, Loranger, Louisiana. Kenneth was preceded in death by his parents Ivy Joseph Istre and Betty Valdetero Istre and his brother Richard Ivy Istre. Preceded in death by his first wife, Betty Jane Reddell Istre, Kenneth is survived by their children Kenneth Dwaine Istre and wife Natalie, Kathleen Istre Alonso and her husband Roland, Kristine Istre Yeldell and her husband Layne, 7 grandchildren and 13 great grandchildren. Preceded in death by his second wife Patsy Green Field Istre, Kenneth is survived by her children Richard Benton Field and his wife Alison, SuEllan Field Moore and her husband Carmon, Tanya Field Mearse and her husband Bill, her 5 grandchildren and 5 great grandchildren. Kenneth also was the last living member of the Founding Board of Directors for the Christian Youth Encampment. He spent many summers there working and teaching to meet the needs of area youth. This was always a very special place for him as well as Betty and the children. In lieu of flowers, the family has requested that donations be made to: Christian Youth Encampment Attn: Justin Simmons P.O. Box 411 Glenmora, LA 71433 The Celebration of Life Service will be held at the Jennings Church of Christ, in Jennings, LA. on Saturday, November 9, 2019. Visitation will begin at 11:00 AM with the service at 2:00 PM Interment to follow at Greenwood Cemetery.

Kenneth Carl Istre closed his Bible for the final time on November 4, 2019 in Dallas, Texas. His daily life for the past 90 years was a living testimony of his faithfulness and love for the Lord. He was a man that enjoyed family, people, and... View Obituary & Service Information

The family of Kenneth Carl Istre created this Life Tributes page to make it easy to share your memories.

Kenneth Carl Istre closed his Bible for the final time on November...

Send flowers to the Istre family.