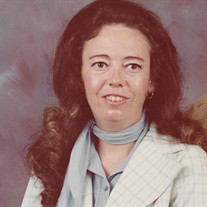 Lana Sue Mason was born June 26, 1948, the second eldest of seven children born to Edna Eloise and Stanley Dewayne Mason. She married Oscar Doyle Jones September 27, 1969 in Dallas, Texas. Together they raised three children, Kevin Doyle, Oscar Alan, and Patricia Sue (“Trish”). Lana loved her children dearly, and was proud also of her sons-in-law Jack Mackey and Mike Hall. She was thrilled when she became a grandmother to Hayle Nicole Mackey. She even wrote a children’s book for her granddaughter to express the unconditional love she had for her only grandchild. Her interests included gardening, fishing, and traveling. One of her last hopes was to be strong enough to go fishing “one last time", with her youngest son. She often reflected back on fond memories of family vacations to places such as Colorado, Nevada, Utah, California, and Missouri, to name a few. In later years, she became interested in genealogy and put together several books on her family’s ancestry. She was preceded in death by her beloved husband Doyle, her parents; Stanley and Eloise, Siblings; Patricia Mason, Judy McCumsey, Michael and Johnny Mason, and son-in-law Jack Mackey. Survivors include her sons; Kevin and Alan, daughter Trish Mackey, granddaughter Hayle Mackey, brothers; Richard and Mark Mason, Aunt Helen Marie Rainey, mother-in-law Emma Jones, brother- and sister-in-law Ken and Anne Bottoms, and numerous nieces, nephews, cousins, and friends. Even when diagnosed with lung cancer late last year, she had great determination in fighting her illness all while remaining positive. She remained a brave, iron-willed woman even throughout her final months. Her family would like to express gratitude to Mike Hall for selflessly providing her with the personal support and care as she so deserved in her last days. “Come to me, all you who are weary and burdened, and I will give you rest. Take my yoke upon you and learn from me, for I am gentle and humble in heart, and you will find rest for your souls. For my yoke is easy and my burden is light." (Matthew 11: 28 - 30)

The family of Lana Sue Jones created this Life Tributes page to make it easy to share your memories.

Send flowers to the Jones family.