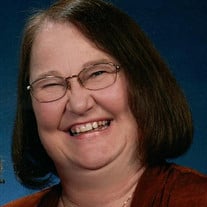 Some of her final words were, "I am at peace. I do not worry, for I am in the hands of my Father." Lois Gayle Gray was born November 7, 1949 to Willie Oscar and Virginia Gray. She left this earth on March 29, 2017, after a valiant battle with cancer while holding the hands of her husband and son. Lois was artistic. She taught herself to sew and made all the ice-skating costumes for herself and her little sister Sylvia. She even made her own elegant wedding dress - the dress of a zillion hand sewn pearls and sequins. She worked for many years at Southland Life Insurance in Dallas. Then she met and married her husband Ronald McCumsey. Later they found that they had lived a block away from each other while growing up in Dallas! This July would have been their 40th wedding anniversary. Although she loved her work, her greatest job and joy came with the birth of their only child, Douglas. She delighted in him and "bought the stores out" of anything you can embarrass a baby with - sparkly sun glasses, funny hats and costumes, on and on. Ron had just retired from LTV after 33 years, when she became ill and he became her constant caregiver. There was no greater love shown by a husband. He cooked, cleaned the house, attended doctors' appointments - all without complaint and always with a joke and a twinkle in the eye. Lois loved her birds, her flowers, her music (of all genres), card games with friends and decorating for the holidays, especially Christmas! She was the "cheeriest cheerleader" at the soccer games and other activities of her grandchildren; Ethan, Logan, Maggie and newborn Kellen. They were never spoken of without a "giggle" in her voice, always finishing a story with, "They are sooo cute!" Church was a tremendous comfort to her and the pleasure she received from the friends there was beyond measure. She often mentioned the great times she had with the "Joy Walkers". They attended Crossroads Baptist Church in Lancaster, The Cowboy Church in Waxahachie and the First Christian Church in Duncanville. As for me - My Big Sister, how can you be gone? It was just a moment ago that I followed you around like a baby duckling. You protected and mentored me all my life! Although separated by thousands of miles, there was still much conversation to be had. She always had time - even the time to hear our cats PURRR by telephone, all the way from Alaska to Texas! There was never a question as to who had sent a package or a card as they were always covered with bows and stickers of birds, cats, flowers and sparkles. My Big Sister, how can you be gone? Thank you for being such a great part of my life! Lois is survived by her husband Ronald McCumsey of Lancaster, TX, her son and daughter in law - Douglas and Brittany McCumsey of Cedar Hill, grandchildren - Ethan, Logan, Maggie and Kellen, her sister Sylvia and her husband Dr. Marius Panzarella of Anchorage, AK and her brother in laws, nieces, nephews, aunts, cousins and friends. A viewing will be held at the Byrum Funeral Home in Lancaster on Sunday April 2 from 2-4 pm and a grave side service to be held at Laurel Land Cemetery the following Monday at 2 pm. She has broken free of the surly bonds of this earth and has soared on the wings of Angels to a Better Place in which we all hope to meet again. Lois, you will be greatly missed!

Some of her final words were, "I am at peace. I do not worry, for I am in the hands of my Father." Lois Gayle Gray was born November 7, 1949 to Willie Oscar and Virginia Gray. She left this earth on March 29, 2017, after a valiant battle with... View Obituary & Service Information

The family of Lois Gayle McCumsey created this Life Tributes page to make it easy to share your memories.

Send flowers to the McCumsey family.