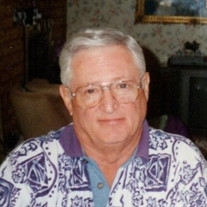 Lonnie Quandon Franks, 81, passed away peacefully on August 31, 2017. Lonnie was born in Dallas, TX on September 16, 1935 to Charles B. Franks and Thelma Joconyne Johnson. He attended Forest Avenue High School in Garland, TX, where he excelled in baseball. Even when attending Lagow Grade School, he was lauded as one of the best fielding shortstops in the city. While playing for the Kiwanas Club, he made All City for 2 years, led the league in RBI, doubles and stolen bases. His fielding came in with the 2nd best fielding average. Known for his strong throwing arm, he also batted clean up and ended one year with a .475 average…the best on the team. After graduating high school he enrolled to Arlington State College; now known as the University of Texas at Arlington, where he hoped to pursue a career in baseball. Although he was scouted by Major League recruiters, Lonnie decided to serve his country and joined the United States Air Force in 1954. During his career in the Air Force, Lonnie served as an Airborne Radio Communications Technician for the Strategic Air Command. He flew in search and rescue missions, as well as couriering high ranking officials during the Vietnam conflict. Lonnie retired in 1974 with the rank of Technical Sergeant. Following in his father’s footsteps, his career path then led him to serve his community for the next 20 years as a Deputy Sheriff in the Dallas Sheriff’s Department. Lonnie worked in the Warrants and Fugitive divisions, retiring with the rank of Lieutenant. Lonnie is preceded in death by his parents, and his beloved wife of 38 years, Linda Franks. He is survived by his sons, Michael Franks and Judy Carlton, Mark Franks and wife Michelle; his daughter Melissa and husband Ron Martin; his step-children Chris Hedgepeth and wife Melissa, Jill Hedgepeth; his grandchildren, Jason, Brenna, Tyler and Georgia Franks; and his step-grandchildren, Casie and Brianna Worley. The family wishes to express their heartfelt appreciation and thanks for the love, friendship and support given by all. Special thanks to the staff at Christian Care Center and Seasons Hospice for their dedication and care.

Lonnie Quandon Franks, 81, passed away peacefully on August 31, 2017. Lonnie was born in Dallas, TX on September 16, 1935 to Charles B. Franks and Thelma Joconyne Johnson. He attended Forest Avenue High School in Garland, TX, where he excelled... View Obituary & Service Information

The family of Lonnie Quandon Franks created this Life Tributes page to make it easy to share your memories.

Send flowers to the Franks family.