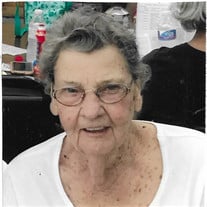 Louise Scott Riddle was born February 11, 1935 in Dardanelle, AR to Oliver and Mabel (Jennings) Lane and passed from this life on July 18, 2020 in Dallas, TX. She was preceded in death by her husband and father of her children, Mack Scott and... View Obituary & Service Information

The family of Louise Scott Riddle created this Life Tributes page to make it easy to share your memories.

Send flowers to the Riddle family.