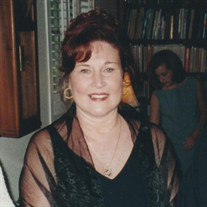 Lynda Joan Avellino Abbott born February 23, 1946 to Ernest and Judy Avellino in Union City NJ. Ernie and Judy built a small bungalow on the corner of Curtis and Beech St to enjoy long weekends "down the shore’ with their favorite daughter (Lynda was an only child)!. In 1957 they decided to make the full time move to Point Pleasant where Ernie bought a double lot down the block and built a larger lovely home for the family to enjoy where Lynda grew up. She was fortunate to have both the maternal and paternal sides of her family living close in the area making her childhood home constantly full of aunts, uncles, cousins and close friends. Throughout her childhood she traveled the eastern United States with her parents having adventures where she learned to ride horses, shoot guns and enjoy the beautiful countryside and all the attractions along the eastern seaboard Lynda attended Point Pleasant High School where she was active in student government, a member of the prom court and head majorette often leading celebratory parades thru the town. She spent her summers working on the boardwalk and fostered lifelong friendships with her lifeguard buddies while teaching many local kids water safety and how to swim. Lynda graduated from the College of Emporia in 1967, she continued her education at the university of Pennsylvania accompanied by her best friend dog and protector Moosie where she became a registered Physical Therapist and went on to work at Monmouth Medical Center, her specialties included burn patients and young children to name a few. She and her group of friends and cousins would attend dances and parties at Ft Monmouth, Nj where she met her future husband Cpt John P. Abbott. They were married shortly after on Dec 30, 1972 "because John needed a tax deduction". Together they moved to Tucson AZ with their German Shepard Rat Dog and St Bernard Clarence and soon they welcomed their first born child John Paul Abbott II,. The Army then transferred John to Baumholder Germany where they had their daughter Casey Lyn Abbott, retiring from the Army the family returned back to the states in July of 1976 later settling in their 1st home Richardson TX. After moving to their 2nd home in Richardson in 1978 Lynda's passion for home renovation was matched only by her love of animals and desire to help others as she was actively a visiting physical therapist working to assist underserved communities. Intrigued by her love for older homes The Abbott family moved to old East Dallas and remodeled 2 houses in historic Munger Place. Out walking 1 day Lynda met a gentleman named Mr. Proctor who was looking to sell his home after the recent passing of his wife. Lynda and John bought 5124 Swiss Ave in 1983 and the great renovation began! Lynda was always happiest when surrounded by family, friends and her beloved pets. Countless animals joined the Abbott family, cats, dogs, bunnies, parrots, mice, fish and even tiny crabs! Lynda's love for animals and John's desire for a "big puppy" led to a surprise gift of a mastiff puppy, Machiavelli which began the long tradition of breeding and showing such lovable furry family members. This love of mastiffs expanded Lynda's circle of closest friends and further developed her holiday traditions. Some of Lynda's happiest moments were taking her beloved mastiffs, family and friends every year to the Turkey trot and filling her home with food music and laughter. In 2007 deciding on a quieter lifestyle and the hopes of a larger property to allow for the addition of miniature donkeys, goats and chickens, Lynda and John moved from Dallas to Red Oak Tx Anyone and everyone was welcomed not only into Lynda' home but her deep and generous heart. She wanted nothing more than to share laughter and love. and the Abbott home was always a warm, welcoming and overflowing with her joyful energy. Family will receive friends from 11:00am to 1:00pm, Saturday, July 10, 2021 at Byrum Funeral Home with a Celebration of Lynda's life beginning at 1:00pm.

Lynda Joan Avellino Abbott born February 23, 1946 to Ernest and Judy Avellino in Union City NJ. Ernie and Judy built a small bungalow on the corner of Curtis and Beech St to enjoy long weekends "down the shore&#8217; with their favorite daughter... View Obituary & Service Information

The family of Lynda Joan Avellino Abbott created this Life Tributes page to make it easy to share your memories.

Send flowers to the Abbott family.