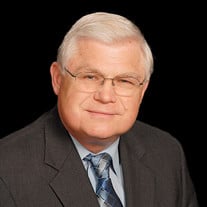 IN LIEU OF FLOWERS, Dean's family would prefer memorials be made to the Moral Courage Foundation, P.O. Box 585, Waxahachie,TX, 75168, the Moral Courage Foundation (https://www.moralcouragefoundation.org/donate/) or to the Brown Street Church of Christ building fund. M. Dean Kilmer, age 68, of Waxahachie, TX, went to be with the Lord on August 21st, 2018. He was born October 29th, 1949 in Alva, OK to Lauren “Bud” and Virginia (Andrews) Kilmer. Dean was preceded in death by his parents and brother Don Kilmer (Yukon, OK.). He is survived by wife Karen, son Keith Kilmer and wife Michele (Springdale, AR), daughter Kelly Jordan and husband Jonathan (McKinney, TX) and sister Kay Ann Lemen and husband Jeff (Oklahoma City, OK). He is also survived by loving in-laws Mona Crawford (Waxahachie) and Steve and Keitha Bailey (Waxahachie). Dean was “Papa” to six adoring grandchildren: Clay Kilmer, McKenzie Kilmer, Kylie Kilmer, Connor Jordan, Luke Jordan, and Tate Jordan. Dean met and married Karen Crawford on Dec. 27, 1969 while they were still students at Harding University in Searcy, Arkansas. They enjoyed 48 years of marital bliss serving as a shining example of love and commitment to all who knew them. Dean was always present and available to his family for wisdom, prayer, advice, support, love and encouragement. Through his unconditional love and unending energy he ensured a lasting legacy of love for his family Dean’s great love for the Lord and for people led him to pursue a life of ministry. He began preaching at the age of 16 and he continued to preach until his passing. Dean received Bachelor’s and Master’s degrees in Biblical studies from Harding University (1971) and Abilene Christian University (1992). He served the Lord’s church close to 50 years. He ministered to churches in Texas, Oklahoma, and Arkansas. Most recently serving as the Preaching Minister at the Brown Street (formerly College St.) Church of Christ for 14 years before retiring in 2015. His life verse was Psalm 118:24 “This is the day the Lord has made we will rejoice and be glad in it.” Dean was active in the communities in which he lived and served on numerous boards. He was a football coach in both Atkins, AR, and Cedar Hill, TX, until he decided to pursue full-time ministry. He led numerous seminars throughout his ministry career including marriage enrichment, Bible leadership, church growth, and spiritual development. He was also involved in many activities to promote leadership among young people, including being a Character Coach for Fellowship of Christian Athletes at Finley Junior High, teaching character development classes for the alternative school in Waxahachie, and coaching in recreational sports. Most recently he was passionate about working with Home Mission, a church organization that provides help, leadership and training for small congregations. Dean was also a champion of living courageously and intentionally. He authored two books; Igniting the Moral Courage of America and Soaring Above the Circumstances. His book Igniting the Moral Courage of America was the impetus to the Moral Courage Foundation, which aims to inspire young people to live up to the moral standards of the Bible and encourages them to courageously promote those moral values in our society. Dean Kilmer was a man of character and compassion. He had the unique ability to make everyone he met feel important. Although he will be greatly missed, those who knew him will continue to be blessed by his life.

The family of M. Dean Kilmer created this Life Tributes page to make it easy to share your memories.

IN LIEU OF FLOWERS, Dean&#39;s family would prefer memorials be made...

Send flowers to the Kilmer family.