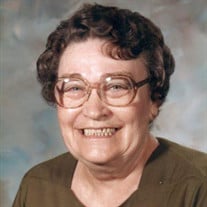 It is with great sadness that we announce the passing of Mable Everett, 97 on April 14, 2022. Mable was a beloved wife, mother, grandmother, great grandmother, sister, and faithful servant of Christ. She was born in Denison, Texas on January 3, 1925, daughter of the late Henry Lee Boney. She is survived by her devoted husband of 42 years, Glen Everett and his two daughters, Donna Sue Jurosek and Mary Jane Gandy. She is survived by her daughters, Sandy Hass, Susie Chupp, Barbara Winder and Janie Bordner. She is also survived by her grandchildren, Tom Dennis, Pamela Daniel, Bryan Chupp and Hillery Burnett, great grandchildren, Jeffery Fitzgerald, Grady Fitzgerald, Alisa Chupp, Logan Chupp, Danica Chupp, MacKinzie Chupp and Hayden Burnett and her brother, Reuben Boney. Her daughter Shirley Embrey and her brother Arlett Boney preceded her in death. Born in a one room house with a dirt floor, she was withdrawn from school in the 7th grade to help raise her brothers and work on the farm after the loss of her mother. She always believed in the power of education and made sure that all of her daughters graduated high school and had the opportunity to go to college. She knew the meaning of hard work and always told us “No matter what you do, do it to the best of your ability.” She was tough at times but always fair. She was a blessing to her family for 97 years and served as their firm but loving matriarch. Her favorite bit of advice when times got tough was to say,” Everything you go through is building character to prepare you for your greatness.” Funeral services will be held on April 18, 2022 at 12:00pm at Byrum Funeral Home Chapel. Viewing and visitation will be held immediately prior to the service from 10:00am – 12:00pm. Mable will be laid to rest at Rawlins Cemetery in Lancaster, TX, right after the memorial service.

It is with great sadness that we announce the passing of Mable Everett, 97 on April 14, 2022. Mable was a beloved wife, mother, grandmother, great grandmother, sister, and faithful servant of Christ. She was born in Denison, Texas on January... View Obituary & Service Information

The family of Mable Marie Everett created this Life Tributes page to make it easy to share your memories.

It is with great sadness that we announce the passing of Mable...

Send flowers to the Everett family.