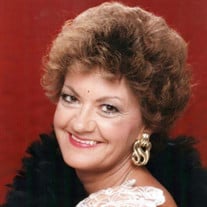 Marilyn Tricomi, was born on December 2, 1943 and gained her wings on April 16, 2022 at the age of 78. She was born in Kemp, Tx and remained a lifelong native of Texas. She was married to Frank Tricomi who recently preceded her in death. Momma and Frank were Entrepreneurs, and in their retirement, they loved working at Traders and making a good life for themselves, being their own boss. Momma was a woman of deep faith and attended Newman Park Church for many years. Throughout her illness, she never swayed from the left or right in her faith, and her words were always “God will take care of me.” She was steadfast and always claimed that she had a league of 10,000 angels watching over her. She declared that until the day she was unable to speak. Momma enjoyed many successes in her career; however, her greatest success was her devotion and love of her family. She was a wife, mom, sister, aunt, grandmother, great grandmother, and a friend who will be missed by all. Momma was about tough love but, it was sincere love and whether you were distant family or close, she loved you just the same. Momma battled cancer and Parkinson’s disease for many years without ever hearing her complain. She passed away in her home surrounded by family. That league of 10,000 angels escorted her to heaven as soon as God reached out His hand. She was loved very deeply and will forever be missed. Marilyn is survived by her daughter, Lori Embree and husband Otis; her daughter, Alisa McDougall and husband Jeff; her son, Russell Mixon and wife Brenda; her son, Frank Christopher Tricomi and wife Desirae; her daughter, Theresa Tricomi and husband Todd. She is also survived by her grandchildren, Kelly, Brandie, Steven, Achlie, Casey, Nicky, Bryan, Thoren, and their families, in addition to her great-grandchildren, Kennedy, Logan, Ian, Lexi, Karlie, Madison, Finley and Rowan; and many nieces and nephews. She was preceded in death by her son, Steven Craig and her great-grandchildren, Jesse and Junior. Thank you to all of our friends and family for the support and prayers during mom’s illness. Marilyn’s family invite you to join them for a Celebration of Life choosing to remember our Momma in a way that honors her spirit. It will take place at Byrum Funeral Home Chapel on April 27, 2022 at 12:00pm with a Graveside Service to follow immediately after at Kemp Cemetery, 1208 Tolosa Rd.. Kemp, Tx 75143.

Marilyn Tricomi, was born on December 2, 1943 and gained her wings on April 16, 2022 at the age of 78. She was born in Kemp, Tx and remained a lifelong native of Texas. She was married to Frank Tricomi who recently preceded her in death. Momma... View Obituary & Service Information

The family of Marilyn D. Tricomi created this Life Tributes page to make it easy to share your memories.

Send flowers to the Tricomi family.