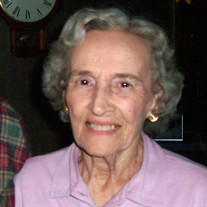 Mary Costolow of Dallas passed away peacefully on December 20, 2017. Mary was born on September 11, 1922 to Joe and Mary Novotny in Cameron, Texas. Mary graduated from Yoe High School in Cameron, Texas in 1941. In 1942, she went to the Austin School of Business at the University of Texas. It was there where she met her husband, Roy Maurice Costolow. Roy and Mary married on June 17, 1943 at St. Austin Catholic Church in Austin, Texas. The couple moved to Lubbock, and Mary continued her education at Texas Tech University. In the Spring of 1944, they moved to Odessa. Mary’s first job was at the First National Bank in Odessa. However, Roy took a job as a pharmacist at Skillerns Drug Store in Highland Park in Dallas. So, the couple moved to Dallas and shared an apartment with her cousin, Beatrice Novotny. The President of First National Bank in Odessa found a job for Mary at Republic National Bank in Dallas. She went to work at Republic National Bank on January 3, 1945. Mary became the first female bank officer in the City of Dallas where she presided over the corporate mortgage and loans department. After retirement from Republic National Bank, Mary and Roy enjoyed fishing and camping trips throughout Texas, Oklahoma, Arkansas, and Colorado. Mary and Roy had no children. However, Mary had a special affection for all her nieces and nephews. She was the birthday aunt who sent birthday cards, with money, to all her nieces and nephews. She was a strong believer in getting a good education and would often pay college tuition to any family member who could not afford their college education. She was a very generous, kind hearted, woman who would lend a helping hand to any family member or neighbor if an unexpected emergency arose. Mary was preceded in death by her parents, Joe and Mary Novotny, and her husband, Roy. Mary was the last survivor of nine siblings who included Joe Novotny, Angie Ruzicka, Evelyn Jekel, Mollie Jekel, Jerry Novotny, Frank Novotny, Ladis Novotny, and Helen Macalik. Mary was a devout Catholic and was a member of St. Thomas Aquinas Catholic Church in Dallas, Texas.

Mary Costolow of Dallas passed away peacefully on December 20, 2017. Mary was born on September 11, 1922 to Joe and Mary Novotny in Cameron, Texas. Mary graduated from Yoe High School in Cameron, Texas in 1941. In 1942, she went to the Austin... View Obituary & Service Information

The family of Mary Elizabeth Costolow created this Life Tributes page to make it easy to share your memories.

Mary Costolow of Dallas passed away peacefully on December 20,...

Send flowers to the Costolow family.