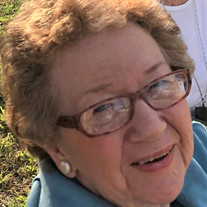 Mary Frances Townsend Sprunck was born at Parkland Hospital in Dallas on February 27, 1935 and passed away at the age of 86, on March 16, 2021. She was the first child of Lois and Clayton Townsend and first grandchild of Lou Ella and George Windsor. Growing up in the original “Bishop Arts”, Mary often shared its history with her granddaughter Casey, who worked at one of the shops in BA. Mary moved to Lancaster with her parents and graduated from Lancaster High School in 1952 where she was salutatorian, pep squad member and voted “Most Friendliest Girl”. After graduation she went to work at Southwest Tablet Manufacturing Company, where she met her husband Philip and married February 6, 1954. They were married 42 years upon his death in March 1997. They moved from Polk Terrace to Red Oak in 1973 with their children Patricia, John, and David. Mary worked at Montgomery Wards in Wynnewood Village in the cashier office and then the City of DeSoto water department, retiring in 1996. She was a member of Beckley Hills Baptist Church where she helped teach the 3 year old class. At First Baptist Red Oak, where she was a member for over 40 years, Mary held various roles such as choir member and President of her ladies Sunday School class. Mary enjoyed music (gospel hymns, Beatles, Bee Gees and Rod Stewart), shopping, her family, little children, and movies. In her early life she liked sewing, house projects, working with numbers and was always up for an outing / experience. She is survived by her children Patricia (Mike), John (Amy) and David. Grandchildren Clayton (Heather), Cameron (Shyrley) and Casey. Great grandchildren Caiden, Gray and Luna. Sister Martha McCallum and sister-in-law Margaret Ellerbee. Family will receive friends from 10:00am to 12:00pm on Saturday, March 20, 2021 at Byrum Funeral Home Chapel with Celebration of Life beginning at 12:00pm. Interment will follow in Red Oak Cemetery.

Mary Frances Townsend Sprunck was born at Parkland Hospital in Dallas on February 27, 1935 and passed away at the age of 86, on March 16, 2021. She was the first child of Lois and Clayton Townsend and first grandchild of Lou Ella and George... View Obituary & Service Information

The family of Mary Frances Sprunck created this Life Tributes page to make it easy to share your memories.

Mary Frances Townsend Sprunck was born at Parkland Hospital in...

Send flowers to the Sprunck family.