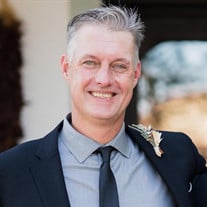 Michael Monroe McCulloch passed away on December 11th, 2021, surrounded by his coworkers, friends, and family. Mike was a one-of-a-kind man, father, and friend. He lived a life of devotion to his family and friends, committed to everyone’s well-being around him. His life; his rules. Mike had his own way of doing things and lived by his own moral compass. A constant nose to the grindstone work mentality was his forte. In his teenage years, he met the love of his life, Melinda, who he was loyally married to until her passing in 2014. Mike, or to some ‘Monroe,’ was a decorated Marine who served in Operation Desert Shield/Desert Storm which shaped the demeanor of his life. He enjoyed his routine and structure, but he enjoyed a good time even more. His bright smile and spirit would regularly raise morale. When he was mad, you knew, but when he was happy, everyone was happy. Mike had a passion for football. He coached youth football in Waxahachie for twelve years and supported his sons through their football journey. Everyone knew his yell, either on the sideline or in the stands. Career wise, Mike spent a collective fifteen years in the metal production field. Twelve of those years were spent at GSI Highway Products where he cultivated a multitude of friendships and support. Mike lived his life fast and to the fullest while also being a pillar in so many others’ lives. Mike leaves behind his three children, Demi Allen, Taylor McCulloch, Talmadge McCulloch; and a grandson, Jordan Cooper; as well as a multitude of others who consider him a father figure. He is survived by his father figure, Andy ‘Pops’ Enriquez and mother figure Linda ‘Moms’ Enriquez. The entire Enriquez family was a major component of his life; a second family to Mike. Though not immediate family, Mike held a special place in his heart for Jessie Mauldin and her daughters, Hiley Mauldin and Attie Barber. Mike was preceded in death by his mother, Mary McCulloch. He was reunited with his loving wife, Melinda, returned to the energy of the Universe. The family extends special thanks to GSI Highway Products, Angel and Jared Mikeska, and Ashley Dagget for all their support during this difficult time. A Celebration of Life service will be held from 2:00pm to 5:00pm on Sunday, December 19, 2021 for friends and family at Tilt Vision Art Studios, 205 E Broadway Ave, Fort Worth, TX In lieu of flowers, the family requests donations be made to help defray expenses of Mike’s Celebration of Life service by using the gofundme link below. https://www.gofundme.com/f/mike-mcculloch-celebration-of-life?utm_campaign=p_lico+share-sheet&utm_medium=copy_link&utm_source=customer

Michael Monroe McCulloch passed away on December 11th, 2021, surrounded by his coworkers, friends, and family. Mike was a one-of-a-kind man, father, and friend. He lived a life of devotion to his family and friends, committed to everyone&#8217;s... View Obituary & Service Information

The family of Michael Monroe McCulloch created this Life Tributes page to make it easy to share your memories.

Send flowers to the McCulloch family.