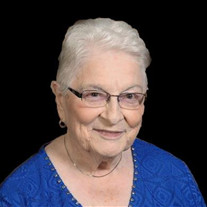 Mona Jane Crawford, 93, was born on July 11, 1926, to Enoch and Lillian Martin Ware in Union County near El Dorado, Arkansas. She went to her eternal home on Sunday, February 23, 2020. Mona is survived by two daughters, Karen Kilmer and Keitha (Steve) Bailey; four grandchildren, Keith (Michele) Kilmer, Kelly (Jonathan) Jordan, Erin Bailey, and Beau (Julianne) Bailey; nine great-grandchildren Clay Kilmer, McKenzie Kilmer, Kylie Kilmer, Connor Jordan, Luke Jordan, Tate Jordan, Brooks Bailey, Reese Bailey, Lincoln Bailey and a loving extended family. She is preceded in death by her parents, her loving husband of 63 years, Donald Keith Crawford, two brothers, Kenneth Ware and Ferrell Ware, as well as, her son-in-law, Dean Kilmer. Mona’s focus in life were her relationships with Jesus, her husband, her family (immediate and extended) and her church family wherever she lived. When she was fifteen, she was baptized into Christ in a pond by the light of the moon and whatever car lights were handy. She attended Quinn community school, graduated from El Dorado High School and went to McKay Secretarial School before marrying. In El Dorado, she loved making a home for her husband and family but also willingly worked outside her home for First National Bank ,where she retired after about 25 years. She enjoyed meeting people and working with others in the community during those times. Mona was proud of her family heritage, loved her hometown community, but she put the Lord above all else. She was a student of the Bible, a Bible class teacher, and a woman of prayer. Mona was actively interested in politics and the news. She was literate, a capable writer and spoke whatever she felt important without fear or hesitation. However, she had a very humble heart and spirit that led her husband (and her daughters) to faith and obedience in Jesus. That in turn, led to the spiritual growth of her family and her husband’s service as an elder for 34 years at the Hillsboro Church of Christ. Both daughters married preachers and she encouraged them and their husbands as they moved away from her and to other states. Mona delighted in her children, grandchildren and great-grandchildren and was intentionally involved in their lives even though distance kept them from her. Mona (and Donald) resided in El Dorado until 2008 when they moved to Waxahachie, Texas, and became faithful members of the Brown Street Church of Christ. Five years ago she moved into Covenant Place Assisted Living where she continued to enjoy life; lovingly cared for by her daughters and the staff at Covenant Place and where she was visited by her much loved family and church family. She continued to be a woman of obedient faith in her Lord and prayer until the day she passed from this life. A Celebration of Life will be held at 10:00 AM Friday at Brown Street Church of Christ in Waxahachie. Graveside service at 10:00 AM Saturday in the Bethel Primitive Baptist Church Cemetery in El Dorado, Arkansas. (From El Dorado - North on 167 for 3 miles, turn left on Arkansas 335 - O'Rear Road for 0.3 miles. Cemetery will be across street from Bethel Primitive Baptist Church.) IN LIEU OF FLOWERS, Mona's family would appreciate memorials to the Church of Christ Missions Fund, 2471 Brown Street, Waxahachie, TX 75165 or the Moral Courage Foundation, PO Box 585, Waxahachie, TX 75168.

The family of Mona Jane Crawford created this Life Tributes page to make it easy to share your memories.

Send flowers to the Crawford family.