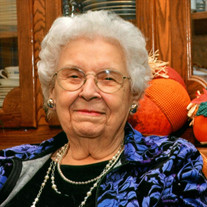 Nell Phillips, loving wife and mother, passed away peacefully, on July 24, 2018, five days short of her 93rd birthday. Nell was born July 29, 1925, in Red Oak, Texas to William and Flora Byrum. She met Leon Phillips in 1940, two years before he was sent overseas to serve in WWII. While he was gone, Nell graduated high school and went to work for the Haggar pant factory, making uniforms for the soldiers. After being gone for over three years, Nell and Leon married on August 9, 1945, four days after his return from the war. Upon his return, Nell and Leon moved to Dallas for him to take a job with the post office. Their only daughter, Nancy, was born in 1948. The family lived in Dallas for the next 30 years. When Leon retired in 1974, he and Nell moved to Waxahachie. During their 30 years there they became faithful members of the Rockett Christian Church. They loved their little country church and made life-long friends there. Nell cherished her family and enjoyed hosting many Thanksgiving dinners for the whole Byrum family. Nothing made her happier than being surrounded with family. Nell made many friends along the way. She loved visiting friends and neighbors over lunch, coffee or the back fence. The couple enjoyed several memorable vacation trips, including a three week road trip of the Western United States and Nell’s dream vacation to Hawaii. Nell and Leon had many happy years, but suffered heartbreak when their only grandson, Scott, passed from this world far too early. The love of family, friends and faith in God gave them the strength to face each new day and each new challenge. Leon became ill and died in 2005. At that time, Nell told Nancy, she felt like half of her was gone. In 2012, Nell fell ill and needed to be closer to Nancy and her husband, Grant, in Austin. She has lived the past 6 years at Brookdale Lohmans Crossing in Lakeway. Nell loved her caregivers at Brookdale and they loved her in return. They became like family to Nell and to Nancy and Grant. Her many caregivers and her Brookdale Hospice team were her angels on earth. We know that Nell once again feels whole as she joins Leon in their heavenly home, together forever.

The family of Nell Rose Phillips created this Life Tributes page to make it easy to share your memories.

Send flowers to the Phillips family.