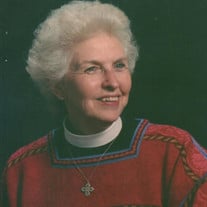 A Celebration of Nona's life will be held at 3:00 PM on Wednesday, January 10, 2018 at St. Matthew's Episcopal Cathedral. In lieu of flowers, memorials may be made to St. Matthew’s Episcopal Cathedral, 5100 Ross Avenue, Dallas, TX 75206. I, Nona Marie Jones Payne, was born August 12, 1931 in Winthrop, AR, amidst the Great Depression, the last of seven children of Thomas E. and Pearl (Thompson) Jones. Loving siblings: Norman, Helen, Herman, Paul, Harold and Glen were the light of my life. I attended school in Winthrop through 1947, at which time, after both parents were deceased, I graduated high school in Christopher, IL, while living with an aunt and uncle. I came to Dallas in 1948 to live with Helen and work. In 1950 I married James Thomas Payne, which lasted until 1977. Our daughter, Glenda Elizabeth Payne Smith, was our delight. I worked in insurance, advertising & real estate. I graduated from UT-Dallas & The Anglican School of Theology and was ordained Deacon in the Episcopal Church in 1992. Private interment in Edgewood Cemetery, Lancaster, TX. (written by Nona)

The family of Nona Marie Jones Payne created this Life Tributes page to make it easy to share your memories.

Send flowers to the Payne family.